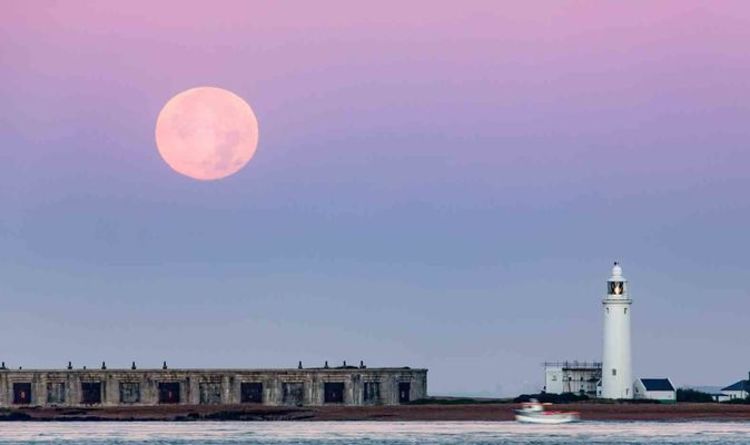 
The next Full Moon will materialise on October 24, and will be 100 percent illuminated by 5.45pm BST – unfortunately while it is still just below the horizon.

If you plan to watch the Full Moon from London, the celestial satellite will rise over the horizon at around 6.16pm BST.

This October Full Moon presents the second Full Moon to occur after the September Autumn Equinox.

Astronomer Bruce McClure, of EarthSky.org, explained: “If you live in the Southern Hemisphere, this October Full Moon ushers in the second Full Moon of springtime.

“At the vicinity of Full Moon, the Moon rises in the east around sunset, climbs highest up for the night around midnight and sets in the west around sunrise.

“On the average, the Moon rises about 50 minutes later with each passing day.”

The Moon’s unusual name derives from early Native Americans, who had a unique way of recording time.

Rather than using calendars as we understand them today, many tribes kept track of time by observing the seasons and lunar months.

For some tribes, the year contained four seasons and started at a certain season, such as spring or autumn.

Others defined a year as 12 or 13 Moons, and assigned each with its own name.

Colonial Americans began to adopt these Full Moon names and apply them to their Gregorian calendar system, and this practice remains preserved today.

October is known as the month when leaves begin to fall and the game is fattened.

It is historically the time for hunting and laying in a store of provisions for the long winter ahead.

October’s Moon is also known as the Travel Moon and the Dying Moon.

The final Full Moons in 2018 fall on November 23 – the Full Beaver’s Moon, and December 22, known as the Full Cold Moon.

The Moon Stole Something From Deep Inside Earth Eons Ago, and Scientists Can Prove It : ScienceAlert
An Experimental Surgical Robot Is Headed to The International Space Station
Record-Breaking Experiment Could Solve a Huge Challenge in Quantum Computing
Minor Google Meltdown Exposes The World’s Utter Reliance on a Single Tech Company
Deepwater Horizon Oil Spill Still Detectable 10 Years Later, Scientists Say