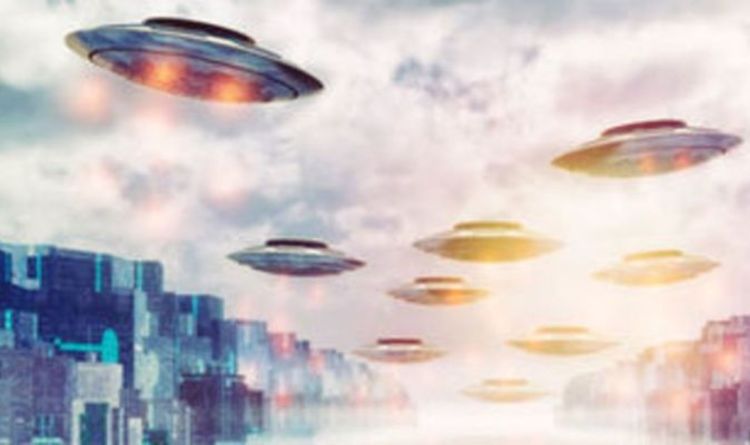 
He has analysed a photograph of the bizarre event, that he suggests was then covered up by officials, who explained it away as a weather balloon.

Mr Gleaves research has been published in the book UFO PHOTO, published by Flying Disk Press.

He said: “The US Army started its constant non-stop bombardment firing thousands of artillery rounds at the unknown object, all to no avail.

“The first shots rang out starting late evening on February 24 and continued well into the early hours of the 25th.

“At 3.16am the 37th Coast Artillery Brigade began firing .50 calibre machine guns and 12.8-pound anti-aircraft shells at the reported unidentified object; over 1,400 shells would eventually be fired at the object in total.

“US Air Force pilots of the 4th Interceptor Command Squadron were alerted and put on standby but their aircraft remained grounded.

“The artillery fire continued sporadically until 4.14am when the ‘all clear’ was finally sounded and the total blackout order lifted at 7.21am.

“Several buildings and vehicles were severely damaged by falling shell fragments and five civilians died as an indirect result of the anti-aircraft fire: three killed in car accidents in the ensuing chaos and two of heart attacks attributed to the stress of the action.

“Considering the duration which elapsed and thousands of people who witnessed the unforgettable event there aren’t many clear quality photographs available to analyse.

“The one true detailed image available had been taken at the time by a newspaper photographer working for the Los Angeles Examiner.”

The UFO expert looked at this photograph in detail for the book.

He said: “Upon analysing the best quality image available in more detail using up-to-date digital enhancement software, it brings to life and enhances the never seen before detail of the object revealing its in-depth features surrounding the structure, which importantly raise more questions as to its original origin.

“The photograph of the initial incident was taken over the Los Angeles area at night over an estimated area of five miles.

“Standard aircraft search lights where located at strategic locations around the city because of the high threat of air raids.

“Central in the original image which was analysed is a large illuminated object which appears stationary but we have confirmation from witnesses that it was moving at a steady constant speed and transit also show in the original image are multiple smaller flashes of light (exploding artillery shells) surrounding it’s entirety together with the numerous searchlight beams criss-crossing across the sky possibly looking for more unknown aerial objects.

“The unknown object eventually moved at a steady speed over nearby Long Beach and vanished out of view over the Palos Verdes hills as the guns finally fell silent.”

Mr Gleaves said before the “cover up” the incident made front-page news along the US Pacific coast when it happened overnight on February 24 just three months after the US joined World War 2 in December 1941.

He said they initially assumed they were under attack from the Japanese Air Force or the German Luftwaffe.

He said: “Little did they know the object could have possibly come from a more far distant place, maybe out of this world.”

Despite thousands of witnesses, a subsequent press conference played down events.

Mr Gleaves said: “The event secretary of the Navy, Frank Knox called the unbelievable incident a ‘false alarm,’ trying to play down the event.

“A few years later when documenting the dramatic incident, the United States Coast Artillery Association identified the unknown object as a meteorological balloon sent up at 1am that initially ‘started all the shooting’ and concluded that ‘once the firing started, imagination created all kinds of targets in the sky and everybody joined in.’

“Much later during 1983, the US Office of Air Force History attributed the incident to a case of obvious anxiety and ‘war nerves’ triggered by a report of a lost rogue weather balloon and exacerbated by stray flares and bright shell bursts from adjoining ground batteries. “

Despite the research, Mr Gleaves says the case remains unsolved.

He said: “Still to this day the object is unidentified I have inverted and filtered the original available source image to analysis and enhance the detail using up-to-date enhancement techniques.”