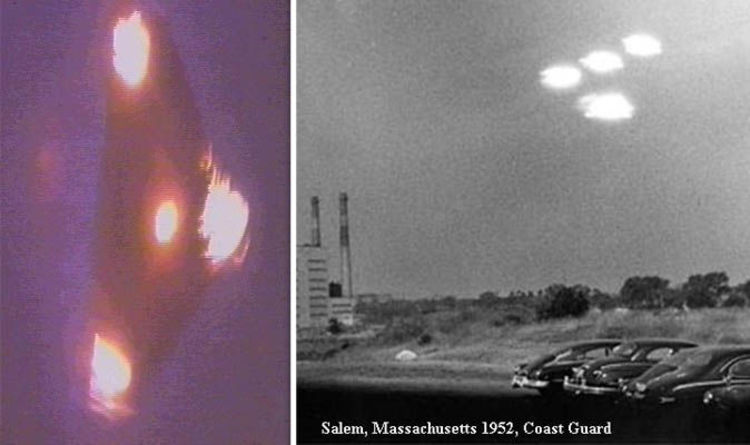 
World UFO Day is observed every year on July 2, since the holiday’s inception by UFO hunter Haktan Akdogan in 2001.

The existence of UFOs and other extraterrestrial travellers is a fiercely debated topic among so-called alien truther and scientists alike.

World UFO Day is supposed to be a day for everyone to pause and ponder the possibility we are not alone in the universe.

The creators of WorldUFODay.com said: “World UFO day is the day dedicated to the existence of Unearthly/Unidentified Flying Objects. The first World UFO Day was celebrated in 2001.

“There are several reasons why this day has found its way into the world.

“One of the first and foremost reasons is to raise awareness about the undoubted existence of UFO’s and with that intelligent beings from outer space.

“Also this day is used to encourage governments to unclassify their knowledge about sightings throughout the history.

“Many governments, the US government for instance, are believed to have gained exclusive information about UFO’s through their military departments.”

In the past World UFO Day was celebrated on both July 2 and June 24 but the World UFO Day Organisation (WUFODO) has since consolidated the celebrations to one date.

The organisation hopes to see a future were UFOs are publicly discussed and longer subject to speculation.

Ahead of the event, WUFODO has shared a collection of UFO pictures on its website, which it believes are definite proof of alien existence.

Among the pictures is “the oldest UFO photograph ever taken” – a photo of a supposed flying saucer atop the summit of Mount Washington, USA, snapped in 1870.

WUFODO said: “Certainly it was difficult to manipulate photos at that time, and remember, there were no flying objects then; at least, not from this world.

“Thanks to a reader, we now have the original ‘stereo’ photo.”

Another photo dated to 1926 or 1927 purports to show a clear flying saucer hovering over Cave Junction, Oregon. It was allegedly taken by a volunteer fireman.

Other UFO pictures show a streak of light over the Eiffel tower in 1953, a flying saucer over Poland in 1947 and a cluster of lights in the sky over Massachusetts in 1952.

Just a few days after UFO Day 2018 wraps up, thousands of alien truthers will descend on the US city of Roswell, New Mexico, to attend UFO Festival 2018 between July 6 and July 8.

Much like UFO Day, UFO Festival celebrates the supposed existence of aliens and the 1947 Roswell weather balloon incident, which many claim was a crashed UFO.

The event organisers said: “The City of Roswell invites UFO enthusiasts and sceptics alike to join in the celebration of one of the most debated incidents in history.

“If it isn’t on your bucket list it should be, and once you attend you may find, like many of the festival visitors, it becomes one our your annual vacation plans.”

A Recurring Weather Phenomenon Drives Nearly 6 Million Children Into Severe Hunger
Signs of blue cheese and beer discovered in well-preserved poop of Iron Age Europeans
Jet Fuel Made From This Crop Could Cut Emissions by Up to 68%, New Analysis Proves
This 12,000-Year-Old Fossil Jaw Could Be The Oldest Known Dog in The Americas
Physicists Capture The Most Precise Measurement Yet of a Neutron’s Lifespan