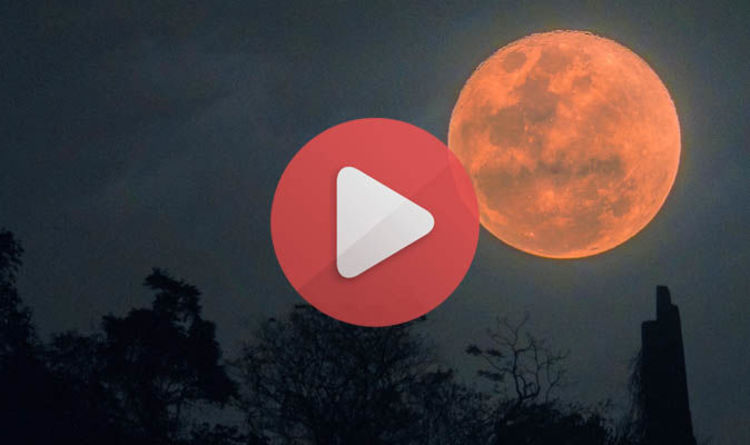 
The Blood Moon will appear in the night skies on Friday, July 27, when the July full moon passes through Earth’s shadow.

Large swathes of the planet will get to see the lunar eclipse from start to finish, or at the very least during moonrise, but some unfortunate countries are left out.

The entire eclipse will be visible from Central Asia and Eastern Africa from start to finish, and the eclipsed moon will rise for Europe, the rest of Africa, Asia, South America and Australia.

This means stargazers in Central America, the US and Canada will have to search online for a live stream of the Blood Moon eclipse.

But the good news is the team behind astronomy and holiday guide TimeandDate.com will broadcast the lunar eclipse in its entirety in just four weeks.

The free YouTube live stream which you can find embedded below will go live at precisely 7pm BST (6pm UTC) on July 27.

Time and Date teased: “The Blood Moon will not be visible in your city?

“Don’t worry, you will get a front seat to this breathtaking astronomical event by tuning in to our stream.”

The eclipse live stream will broadcast over the internet from locations in Greece, South Africa and Australia.

Audiences will have an unprecedented opportunity to hear live commentary from astronomers at Perth Observatory, Australia, and the Astronomical Society of Southern Africa.

Time and Date will also stream footage from its mobile observatory on the Greek island of Santorini.

The website wrote: “If the skies are clear, the eclipse will be visible in most parts of Europe, Asia, Australia, and Africa.

“Our eclipse coverage with live footage and minute-by-minute updates is your perfect companion to this eclipse – whether it’s visible from your location or not.”

Ahead of the anticipated eclipse Express.co.uk was told the Royal Observatory Greenwich in London will also host its own Blood Moon live stream and commentary on the night.

Amateur astronomers familiar with robotic telescope service Slooh can also look forward to a Slooh livecast of the eclipse.

NASA’s space boffins could also choose to join the fun and have done so in the past.

During the January 31 Super Blue Blood Moon, the US space agency live streamed the lunar eclipse online on NASA TV, Ustream and YouTube.

Why does the Blood Moon turn red during the total lunar eclipse?

During the eclipse, the moon will pass into the Earth’s darkest shadow or Umbra.

The shadow will cause the moon to temporarily vanish against the dark night to reappear with a deep red or orange glow.

The Blood Moon appears during the eclipse despite direct sunlight being cut off by the Earth’s shadow because bands of light still bend around the planet and refract in the atmosphere.

The refraction causes shorter wavelengths of light like blue and green to filter out and longer wavelengths like red and orange fall directly onto the moon.

The sunlight scattering effect is known as Raleigh Scattering and is also responsible for the blue colour of the sky and orange sunsets.

This 3,700-Year-Old Tablet Shows The Oldest Known Example of Applied Geometry
Earth’s Rotation Is Slowing Down, And It Could Be Why We Have Oxygen For Life
High Testosterone Doesn’t Actually Make Men More Successful, New Study Hints
Math Ability Can Be Predicted by Neurotransmitter Levels in The Brain, Study Finds
Nearly 14,000 Scientists Warn That Earth’s ‘Vital Signs’ Are Rapidly Worsening