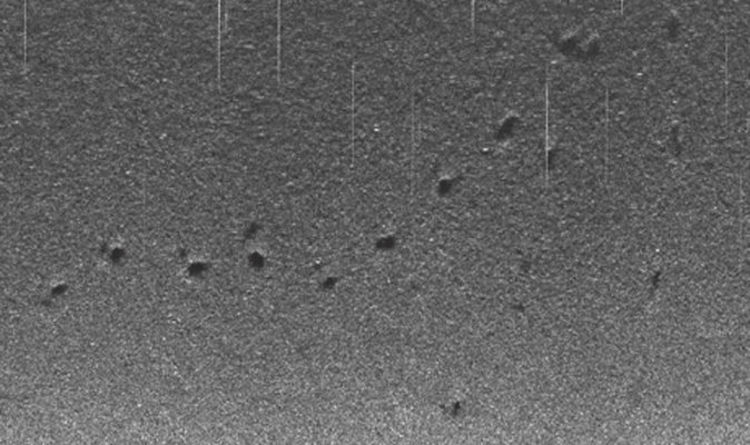 
A robot sent four kilometres below the surface of the Pacific Ocean between Mexico and Hawaii discovered the mysterious tracks.

The footprints are massive and measure at a length of 2.5 meters and a depth of 13 inches and are so deep that anything which could make them should not be living that far below.

They were discovered by a deep-diving robot as part of a British study from the National Oceanographic Centre (NOC) in Southampton.

Scientists there ruled out the possibility of mining or scientific operations, and the experts said they were too large to be created by fish or any other typical deep-sea animals.

In total over 3500 individual depressions were detected, and experts are unclear what has made them.

Lead author of the research Dr Leigh Marsh said: “Analysis revealed that the depressions were not randomly distributed, or occurring in isolation, but formed curvilinear features, or ‘tracks’, that almost looked like footprints.”

The mystery of the footprints have set the tongues of conspiracy theorists wagging.

Popular YouTube channel Secure Team 10 said the footprints are “like nothing we have seen or heard of before”.

The narrator adds: “We could be talking about machinery or technology that are not of this Earth.”

While scientists do not have conclusive evidence of what is making the massive tracks, experts do have an opinion.

Dr Marsh adds that the most likely culprits are “deep-diving whales”.

Although the large aquatic mammals are not known for diving so deep, similar tracks found across the globe to imply that on the odd occasion, whales can plunge to such depths of four kilometres or more.

The report states that beaked whales and sperm whalers are “the most specialised and least understood of all marine mammals” and could be the ones causing thew huge tracks.

The study reads: “Beaked whales have been reported to make similar markings on deep-sea mud volcanoes and, historically, there are reports of sperm whales ploughing the deep seafloor and getting entangled in telecommunication cables.

“In shallower waters, on the continental shelf, other species of whale are known to utilise the seafloor for feeding or removing dead skin, however, in the deep ocean, it is still unclear why whales would make such marks.”

Dr Daniel Jones from the NOC said: “This intriguing observation highlights our imperfect knowledge of this deep-water environment.”

Dr Marsh concluded: “Like many discoveries in ocean exploration, these findings were totally unplanned, and resulted from novel application of new technology.

“The next step would be to provide more conclusive evidence that whales are makings these tracks.

“Electronic depth-tags, attached to the animals themselves, will provide direct evidence that whales can dive to these abyssal depths.”