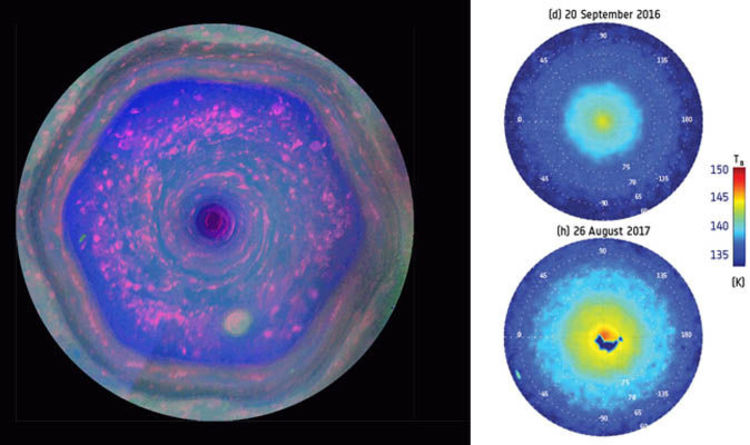 
The presence of this object in Saturn’s stratosphere came as a surprise to scientists who were studying Cassini’s mission data.

To date, only one other hexagon-shaped object like this was found by Cassini, lower in Saturn’s atmosphere.

Leigh Fletcher, University of Leicester, said he was surprised to discover two identical hexagons appearing out of thin air in two separate locations.

He said: “Either a hexagon has spawned spontaneously and identically at two different altitudes, one lower in the clouds and one high in the stratosphere, or the hexagon is, in fact, a towering structure spanning a vertical range of several hundred kilometres.”

Scientists believe this new structure could peak up to 180 miles (300km) above the planet’s clouds.

But UFO hunters hoping to learn the hexagon was artificially raised by an alien civilisation will be disappointed to learn it is instead a bizarre polar vortex.

The high-altitude vortex is a weather pattern similar to one discovered by NASA’s Voyager spacecraft in the 1980s.

The first vortex of this kind was spied by astronomers over Saturn’s southern pole.

It was not until Cassini arrived at Saturn in 2004 that scientists could observe the vortex in great detail for the first time.

An example of this weather phenomenon, affected by the planet’s rotation, can be found on Earth in the form of the so-called Polar Jet Streams.

The Saturnian vortex has now both baffled and excited scientist because it suggests discrepancies between how the north and south poles behave.

The vortex could also unlock new clues about the way in which energy is transported around Saturn.

Dr Fletcher said: “The edges of this newly-found vortex appear to be hexagonal, precisely watching a famous and bizarre hexagonal cloud pattern we see deeper in Saturn’s atmosphere.

“While we did expect to see a vortex of some kind at Saturn’s north pole as it grew warm, its shape is really surprising.”

He added this new hexagon is nowhere near as matured and developed as the first one discovered at the south pole.

The vortex will likely continue to grow and intensify over the coming years.

Dr Fletcher and his team of researchers who studied the vortex are also not entirely convinced a single towering structure should exist this high in the atmosphere.

But undiscovered processes in the planet’s northern atmosphere could keep the hexagon “trapped” in the cloud tops.

The space expert said researchers need to learn more about this phenomenon but the only problem is Cassini retired in 2017 when it spectacularly took a death dive into Saturn’s atmosphere.

He said: “We simply need to know more. It’s quite frustrating that we only discovered this stratospheric hexagon right at the end of Cassini’s lifespan.”