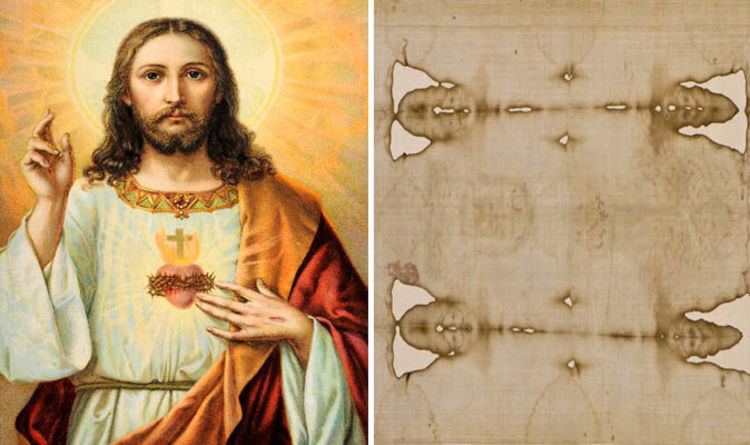 
A forensic team behind a four-year investigation into the blood stains on the shroud say the elevated presence of a compound called bilirubin is indicative of torture.

The claim would be consistent with the Biblical story of Christ’s crucifixion which famously includes falling as he carries his own cross, the crown of thorns, a Roman soldier spearing his side and of course the actual nailing to the cross.

The Italian team were initially called in to examine why the blood on the Shroud of Turin is red and not brown.

In normal circumstances red blood would be oxidised by the ultraviolet rays in sunlight and turn brown – but the Turin Shroud blood remains mystifyingly red.

Research co-ordinator Paolo Di Lazzaro said the discovery of large amounts of bilirubin in the blood was indicative of the body reacting to violence and suffering.

He added: “For example when a person has been hit very hard red blood cells are broken down in the blood and the liver releases bilirubin”.

But he added the primary goal of the research was to “understand why the blood on the cloth is red and not brown , as it should be an ancient and oxidized blood”.

The Turin Shroud goes on public display on Friday August 10.

The Shroud of Turin – also known as the Turin Shroud or Santa Sindone – is a length of linen cloth bearing the negative image of a man who is alleged to be Jesus Christ.

It is stored in the royal chapel of the Cathedral of Saint John the Baptist in Turin, Piedmont, northern Italy.

Some Christians believe the Shroud to be the burial cloth of Jesus Christ, which he was wrapped after the crucifixion.

However the Shroud has been repeatedly debunked.

In 1390 an Italian bishop confirmed a local artist confirmed it was a hoax. Radio carbon dating techniques have also dated the cloth to this date.

Officially the Catholic Church neither formally endorses nor rejects the shroud.

The image on the shroud is much clearer in black-and-white negative than in its natural sepia colour, and this negative image was first observed in 1898 on the reverse photographic plate of amateur photographer Secondo Pia, who was allowed to photograph it while it was being exhibited.

The Pacific Is Destined to Vanish as Earth’s Continents Meld Into a New Supercontinent : ScienceAlert
Unique Remains of What Could Be The World’s Largest Bird Found in Australia : ScienceAlert
We Just Got Our Closest View of Europa in 20 Years, And We Can’t Stop Staring : ScienceAlert
La Niña’s Shock Return Suggests Important Details Are Missing in Climate Models : ScienceAlert
3 Major Aquatic Animal Groups Can Trace Their Lineage to This Ancient Armored ‘Worm’ : ScienceAlert