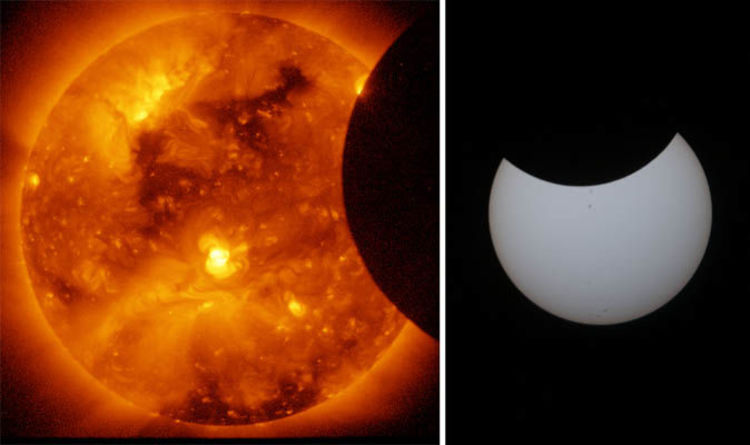 This upcoming Saturday, August 11, the Moon and the Sun will align in the skies to create a stunning and rare spectacle of nature.

The two heavenly bodies will appear to partially cross paths above the Earth, with the dark disc of the August New Moon biting into the glowing face of the Sun.

The mesmerising astronomical event is known as a partial solar eclipse of the Sun.

This month the partial eclipse will focus over the Northern Hemisphere near the North Pole, passing over the northernmost reaches of Europe, Greenland, Russia and East Asia.

Solar eclipses occur between two and five times a year and partial eclipses account for about 35 percent of all eclipses.

The remaining eclipses are either total solar eclipses when the Sun is entirely covered by the Moon, or annular eclipses, when the Moon covers the Sun but is farther from Earth than usual and leaves a bright glowing halo around its edges.

A partial eclipse, on the other hand, will happen when the Sun and the Moon are not perfectly aligned and only a portion of the Moon obscures the Sun.

Partial eclipses typically occur near the horizon around the Earth’s polar regions.

Eclipse 2018: During a partial eclipse the Moon obscures part of the Sun’s bright disc (Image: NASA)

Observed from Earth, the phenomenon is not powerful enough to darken the skies in the same way a total eclipse does.

The Moon would have to cover at least 90 percent of the Sun for any noticeable darkening but with special equipment, stargazers can still see the Moon pass in front of the Sun.

NASA’s scientists at the Space Goddard Flight Center explained: “A solar eclipse occurs when the Moon moves between the Earth and the Sun, blocks the Sun’s light and casts a shadow on the Earth.

“When the Moon completely covers the bright disc of the Sun, that’s a total solar eclipse, and it happens roughly every year-and-a-half somewhere on Earth.

“A partial solar eclipse is more common, happening at least twice a year.”

Unlike a lunar eclipse, when the Earth casts its large shadow on the Moon, solar eclipses are a pretty rare event to spot.

The Moon is approximately only about 27 percent the size of the Earth and the shadow it casts on the Blue Planet during an eclipse is relatively small.

This little caveat means solar eclipses, both total and partial, are very limited in where they can be seen. 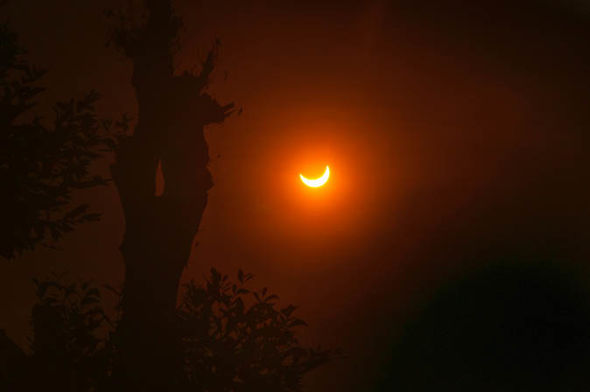 Eclipse 2018: The partial eclipse will rise on the morning of August 11 (Image: RIDWAN ARIFIANDI)

NASA said: “You have to be on the sunny side of the planet and you have to be in the path of the Moon’s shadow.”

But if you do find yourself lucky enough to be within an eclipse’s path of totality the US space agency said you have hit the proverbial “jackpot”.

On average, the same spot on Earth only witnesses a solar eclipse every 375 years, so you better pay attention to this one.

Click here to read more on where the August partial eclipse will be visible this weekend. 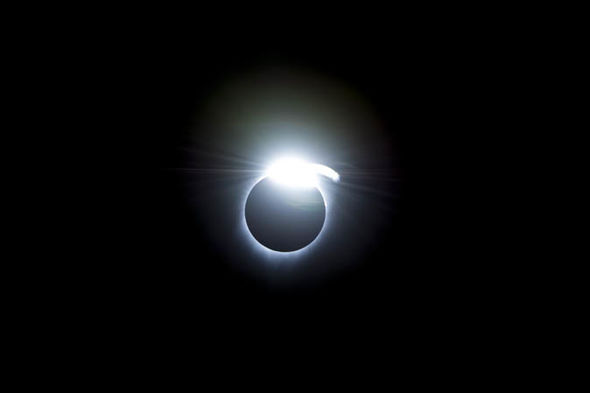 Eclipse 2018: Partial eclipses account for about 35 percent of all solar eclipses (Image: NASA)

What time will August eclipse rise this week?

The partial eclipse will unfold from start to finish in the early morning hours of Saturday this week, starting at around 8.02am UT (9.02am BST).

Click here to read more: What time is the August partial solar eclipse? When does the eclipse start?

Watch A Great White Become an Orca’s Lunch in World-First Footage : ScienceAlert
Long COVID Is Still Raising More Questions Than Answers, Say Researchers : ScienceAlert
We Just Got Our Closest View of Europa in 20 Years, And We Can’t Stop Staring : ScienceAlert
NASA Is Sending a Rotorcraft to Titan in 2027. Here’s Where It Will Land. : ScienceAlert
Narwhals Are So Weird, Scientists Used Chaos Theory to Explain Their Behavior : ScienceAlert