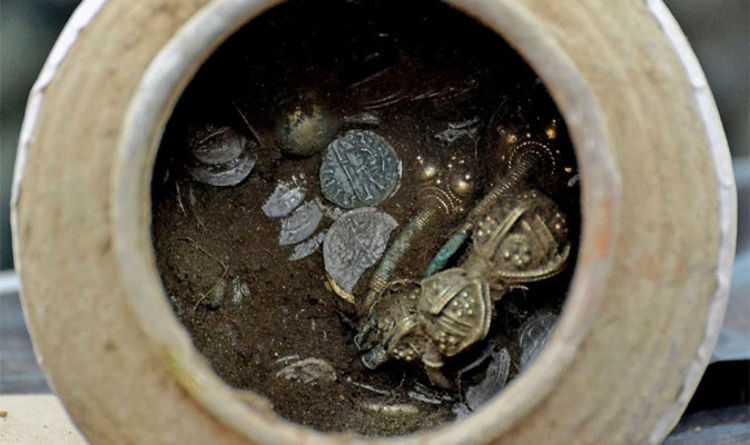 
The National Museum of History (NMH) in Sofia reported that the treasure was discovered in the Kaliakra fortress, along the Black Sea coast, under a burned house which dated back to the 14th century.

A total of 957 gold and silver items were discovered in a clay pot as part of excavations which were funded by the Ministry of Culture of the Republic of Bulgaria, Kavarna Municipality, and the NMH.

It is believed the treasure comes from the Second Bulgarian Empire (1185 – 1396/1422) and the Dobrudzha Despotate (also known as the Principality of Karvuna).

The finding was “hidden at the end of the 14th century, during some of the dramatic attacks against the capital of the Dobrudzha Despotate.”

During an excavation from 2014 to 2017, archaeologists discovered similar treasures in the same building.

In that research, the archaeologists found silver hardware from a church book and a collective find of 26 copper mangers (a small copper coin) of Sultan Bayezid Yildirim who ruled from 1389-1402.

The treasure finders said: “The building itself was built on top of the ruins of Antiquity structures, and rich burials from the 14th century have been found around it.”

Bulgaria has become something of a hotspot for treasure hunters in recent times.

Just earlier this month, archaeologists discovered a statue of a Roman leader dating from as far back as the third century in the ancient city of Heraclea Sintica near the village of Rupite in southern Bulgaria.

The director of the National Archaeological Institution, Ludmil Vagalinski, told local media that the statue is most likely a depiction of a Roman magistrate.

The statue contains a stone box with an inscription and papyrus inside, which local media report shows the man depicted in the piece of art is most likely a magistrate in a high position.