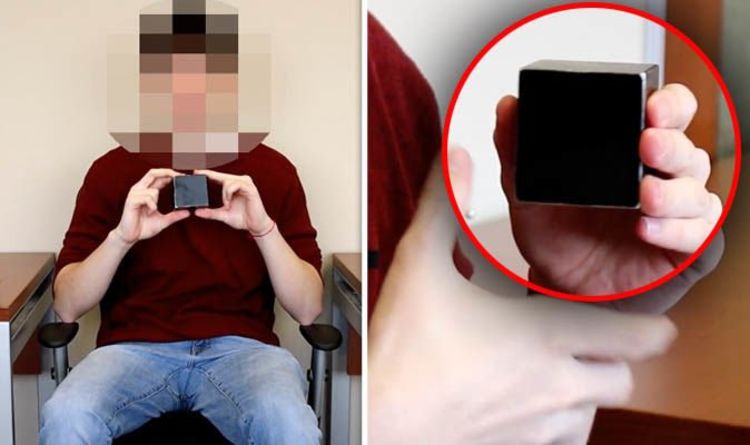 
The anonymous time traveller who introduced himself as Noah, claims to be a time travel agent from the not-too-distant future. Time traveller Noah has previously released confession tapes online where he shared his predictions, forecast and warnings of the years ahead. In a newly published video, the supposed time traveller has now claimed to finally unveil his time machine from 2030. Speaking to paranormal investigators from YouTube channel ApexTV, Noah said: “What I’m about to show you guys is a time machine from the future. No lies.”

In the video, Noah is seen pulling out an inconspicuous black cube from a brown paper bag.

The black cube, no bigger than the size of Noah’s balled fists, is supposedly packed with fantastical technology.

As the time traveller demonstrated it to the camera, Noah stressed the cube is the real deal.

He said: “It looks like an average black cube unless you hold it and then you realise how heavy this actually is.

“It’s full of technology and it actually acts as a type of mechanism that you bring with you when you time travel, and it brings you back to your natural year. My natural year is 2030.

“Most time travellers use it by putting it against their left hands. For me, it does not work because my chips is deactivated.

“Like I said before, I was fired and I no longer serve the government – they obviously deactivated the chip.”

The incredibly bizarre video comes just one day after time traveller Noah tried to convince the world a jar of black goo he was holding, was nanotechnology from the future.

On other occasions, Noah showed off crumpled up pieces of printer paper with some dates and events on them, claiming they were pages torn out from future history books.

Noah has now said the black cube held in his hands is his “last attempt” to return back to his timeline.

He said: “I’m probably on high alert in the government right now when this video is posted.

“They have no idea I am about to show this time machine and now that I have, I’m going to be in a lot of danger. I wouldn’t be surprised if I went missing.”

However, many of the people saw the video, were not convinced by another in a long chain of incredibly bizarre claims made by Noah and ApexTV.

Ali Haider commented on the video saying: “I love your channel. Keep up the fake but good work.”

YouTuber JD Ball said: “Sure but per usual none of it ever works. Fake.”

And user Bob Sacamento said: “Any monkey with access to the internet and some imagination can come up with random stuff that is somewhat relevant.”