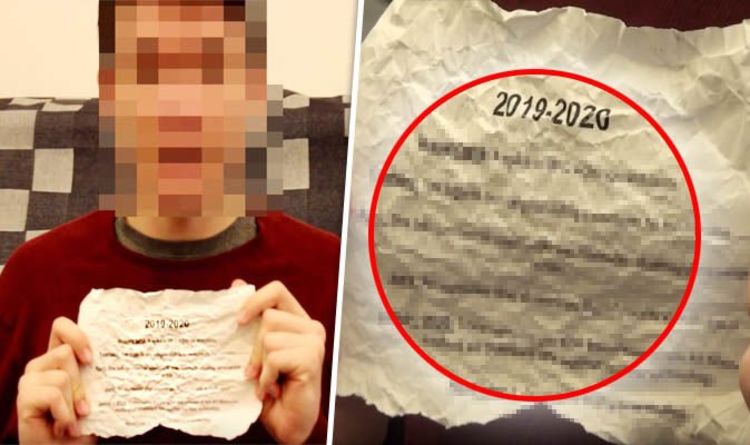 The time traveller, shrouded behind a veil of mystery and the name of Noah, claims to be stuck in the year 2018 after being sent back in time from the future. Noah has now revealed a complex list of future predictions which he believes will validate his incredibly bizarre time travel stories. Speaking to paranormal investigators from the conspiracy YouTube channel ApexTV, Noah said he was in possession of library pages from the future. These crumpled up pages of what looks like standard printer paper, allegedly detail the “exact dates of future events”.

The earliest of these dates points to an increased number of UFO sightings in January 2019, meaning Noah’s claims will be soon put to the test.

The supposed time traveller said: “I’m here to tell you guys about the future because we have a lot of things coming – aliens, global warming and war.

“Believe it or not, this is the facts. I do not change them in any way, this is what happens in the future.

Time travel news: Noah claims to be stuck in this year after travelling from 2030 (Image: APEXTV)

“In the future aliens are also found. They crash all over the world and we uncover them and we become peaceful with aliens.

“Aliens are something I cannot describe with my words.”

Noah then goes on to describe a number of future predictions such as the rise of an Artificial Intelligence world government, smart brain chips and a global conflict with North Korea.

All of these events are noted down on Noah’s “library pages” which he pulled out in front of the cameras in a discreet location.

“February: The biggest and longest lasting snowstorm hit the midwest.

“January 2020: Controversy began after the release of the A1 Machine Android as protesters are against the new technology.

The second list, dated 2028 to 2029, reads: “August 2028: Time travel technology and the existence of intelligent extraterrestrial life was released to the public.

“November: Yolanda Renee King was elected as President of the United States at just 20 years old.

“February 2029: An implanted chip know as ‘The One’ was released that allows people to pay, stay healthy and expand their natural brain functions.”

Another “big crisis” not listed on Noah’s pages is the effects of global warming on the planet.

He said: “There’s trash everywhere. There’s pollution in the air which is causing the climate to change.

“There are forest fires everywhere. We need to stop this.

“There are states that are basically covered in water from now to 2030. It just needs to stop.”

However, not everyone was convinced by Noah’s class and supposed artefacts from the not-too-distant future.

Robert Gadling commented on the YouTube video: “Those are not book pages. Those are clearly typed.”

Michael Vititoe said: “I wonder what excuses he will come up with when nothing happens?”

Forests at Risk of Burning an Extra 30 Days a Year Without Climate Action : ScienceAlert
An AI Found an Unknown ‘Ghost’ Ancestor in The Human Genome : ScienceAlert
Cannabis For Pain Relief? Review of 20 Studies Provides Sobering Results : ScienceAlert
A ‘Wormhole’ Built on a Quantum Computer Teleported Information as Predicted : ScienceAlert
Psychologists Found a Weird Trick That Changes How Food Tastes : ScienceAlert