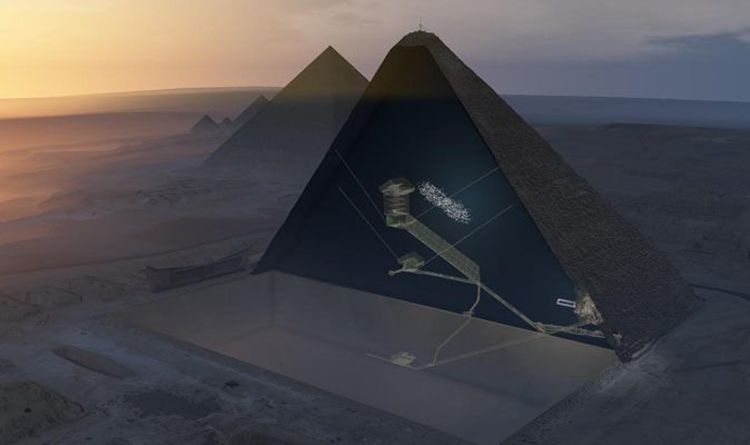 
For thousands of years, the pyramids have stood as hallmarks of ingenuity, royalty, and engineering. Their very nature suggests they were designed and built by a people with superior intelligence and access to advanced tools and skills. The internal construction of the Great Pyramid resembles a power plant and no mummy has ever been found inside.

It is regarded by many as one of the best examples of ancient energy machines and some claim it was a Tesla-like power plant created thousands of years ago.

These theorists suggest it was a huge ancient structure that was capable of using the Earth’s natural properties in order to create or produce a great amount of energy.

In Netflix’s 2016 documentary “The Pyramid Code”, archeologists and theorists claim the ancient Egyptians came to the Great Pyramid to get more healthy energy.

Theorist Abd’el Hakimawyan explains: “From that spot, you know, was energy perhaps from the earth.

“It appears as though they were attempting to control the flow of this energy and use it for their own purposes.”

This energy is believed to have been used by the ancient Egyptians and other cultures such as the ancient Mayans.

This theory, however, has been firmly rejected by mainstream researchers.

Many accounts from those who have made the arduous climb to the top of the Great Pyramid involve minuscule yet noticeable shifts in energy, prickling sensations in body extremities and even cases of electric shock.

Climbing to the top of the Great Pyramid is now illegal but in the late 1800s a British inventor named Sir William Siemens made it to the flat, settled summit.

Upon reaching the summit, one of his guides remarked that when he raised his hand with his fingers spread, his ears picked up a shrill ringing noise.

Siemens then raised a forefinger, and felt a prickling sensation emanating from the tip and spreading through his hand.

Not long after, the inventor went to quench his thirst with a celebratory sip of wine, and received an electric shock from his lips touching the bottle.

The documentary suggests that these were “energy pyramids” created to conduct energy or alter frequencies over large areas of land.

The only thing missing for the Great Pyramid of Giza to function as a power plant was a source of energy, which is why the ancient builders of the Great Pyramid took advantage of the water at the Giza plateau.

The Giza plateau where the pyramids are located is full of underground water channels.

This means that the high volume flow of water that passes through these underground cavities is capable of producing an electrical current; known as physio-electricity.

Physio-electricity can be defined as “electricity obtained from the natural physical movements with the help of certain harnessing devices”.

Even the shape of the pyramid itself leads some to believe that pyramid “power plants” were and are possible.

Still, there remains a lot of unanswered questions regarding the many theories as to how they would have achieved this process.

Octopus Brains Evolved to Share a Surprising Trait in With Our Brains : ScienceAlert
The FDA Just Approved The Most Expensive Drug in The World : ScienceAlert
Two Black Holes Met by Chance, And It Created Something Never Seen Before : ScienceAlert
Scientists Glimpse Incoming Asteroid Just Hours Before It Makes Impact : ScienceAlert
Volcanoes May Have Transformed Venus Into a Blistering Hellscape : ScienceAlert