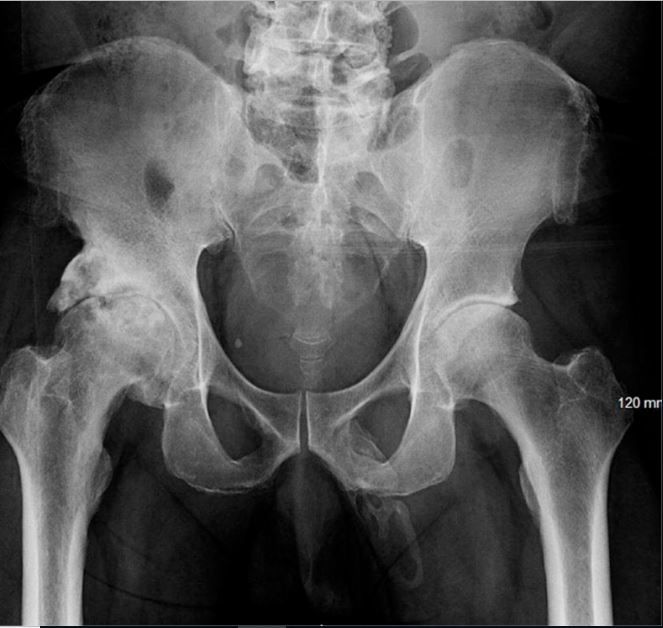 
Sometimes, the body grows bone in places it shouldn’t.

That was the case for a man diagnosed with penile ossification, a extremely rare condition in which bone forms inside the penis.

OMG! The poor guy! His penis is getting hard… Yes bone hard!

As explained by the Journal Urology Case Reports:

The 63-year-old man went to the emergency room after he fell on the sidewalk onto his buttocks. He was able to walk, but he told doctors he was experiencing knee pain.

When doctors performed a physical exam, the man also reported penile pain. Given that the man had fallen on his butt, doctors decided to first X-ray his pelvis to check for bone fractures. That’s when they noticed something very strange: The man appeared to have “ossification” along the entire shaft of his penis. In other words, bone had formed inside the penis.

The man was diagnosed with “penile ossification.” The condition is very rare, with fewer than 40 cases reported in the medical literature.

Ossification happens when calcium salts build up in soft tissues, “leading to bone formation in areas of the body where there is connective tissue.”

Exactly why this happens isn’t always clear. But doctors know that penile ossification, though rare, is often linked with another condition called Peyronie’s disease, which occurs when scar tissue builds up in the penis, causing the organ to bend or curve. This condition can also cause penile pain with or without erections.

Other possible causes can include metabolic diseases, end stage kidney disease or trauma.

Treatment for penile ossification depends on the extent of bone formation and the patient’s symptoms. Men who don’t have any symptoms typically don’t need treatment right away. But those with bothersome symptoms, such as pain, may be prescribed painkillers or receive injections in the penis with certain drugs to reduce pain or curvature. In severe cases, men may need surgical treatment.

This reminds me of the the baculum (also penis bone, penile bone, or os penis, or os priapi). This bone is found in the penis of many placental mammals. It is absent in the human penis, but present in the penises of other primates, such as the gorilla and chimpanzee. Is this guy undergoing a mutation?