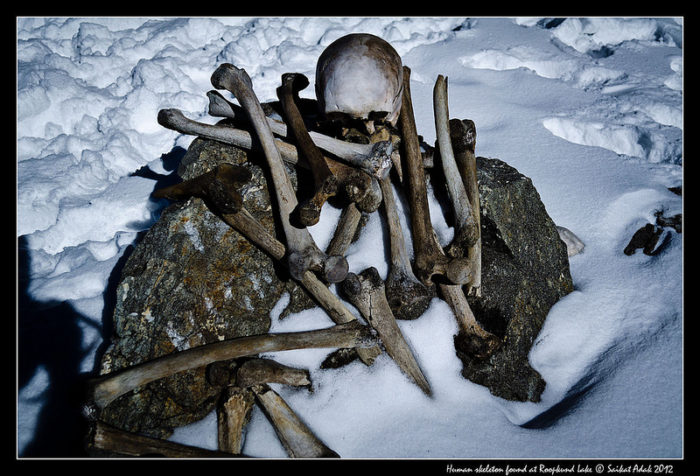 
There are some creepy places where dead bodies just lay out in the open! Take Roopkund glacial lake, which is during the winter the perfect place to go skating.

But when the ice melts, the horror movie starts. The entire area surrounding the lake is covered with discarded bones, discarded HUMAN bones. And nobody knows what really happened to them!

The Skeleton Lake was first discovered in 1942 by a forest guard who stumbled upon hundreds and hundreds of skeletons floating in and surrounding this tiny pond.

I think I would have run away. What about you?

But what are these mysterious bodies?

Not all of the hundreds of skeletons at the Himalayan site are from the same place or period:

Local folklore speaks about King Jasdhawal of Kanauj, who, back in the medieval days, threw an epic celebration in these mountains.

However, the local deity, Latu, probably in a bad mood on this exact day, started pooped on this party by raining death down on the king and his entourage from the heavens.

Yes, indeed! Forensic studies of some of the more than 600 skulls located in the area revealed that the skeletons date back to the year 850 and that the cause of the death came from above: a sudden storm of apocalyptic large hail.

But The Mystery Deepens

But not all of the hundreds of skeletons at the Himalayan site are from the same place or period. A new study states that some of those people originated in the vicinity of Greece and Crete around 220 years ago. But why the genetically unrelated men and women traveled to Skeleton Lake, or how they died, is still a mystery.

Weird, no? A trip from Greece to the sky-scraping lake covers about 5,000 kilometers. Were they slaves? Or was it a sacrifice?

So, A Severe Hailstorm And A Mystery

Now large number of skeletons around the icy Roopkund lake are being stolen by tourists, trekkers and curious researchers, posing a threat to the historical and religious existence of the ancient water body.

Present-day Hindu pilgrims travel past Roopkund Lake on their way to a northern Indian sanctuary where they worship the goddess Nanda Devi. Perhaps a catastrophe of some kind (the hailstorm) killed pilgrims there 1,200 years ago. But Mediterranean people in the Himalayas 200 years ago were likely neither Hindus nor pilgrims.

So there is still something mysterious and mystical around this glacial Skeleton Lake located at an altitude of about 5,029 metres in Uttarakhand, India. And again, never party within earshot of Himalayan deities. They’re big fans of their beauty sleep!

A Billion-Dollar Biotech Company Plans to Bring The Dodo Back to Life : ScienceAlert
We Used to Hate Commuting. Now We Realize We’ve Lost Something. : ScienceAlert
What Can They Actually See? : ScienceAlert
Millions Are at Risk of Flooding Due to Climate Change – But Not Where You’d Think : ScienceAlert
Ancient Goo Spills The Secrets of How The Egyptians Mummified Their Dead : ScienceAlert