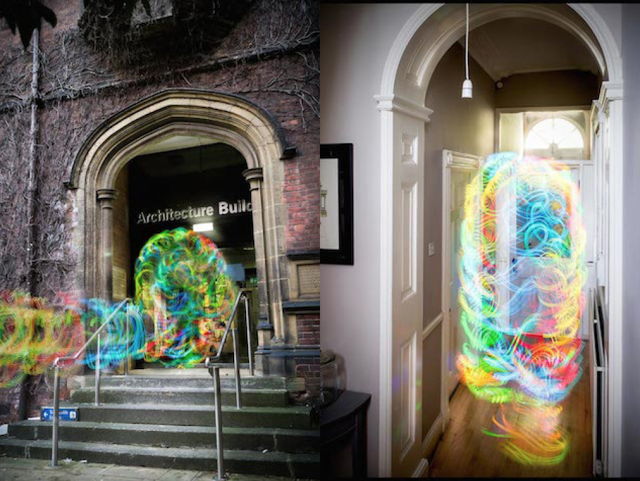 
Have you ever wondered what the electromangetic fields (EMFs) that surround virtually every person carrying a mobile device with WiFi or data capability look like?

More than 3.2 billion people access the internet every single day. With WiFi you have access to instant information and connection. But does it come at a cost?

Because we can’t see the frequencies of our WiFi devices, it’s easy to overlook the potential harm they might be causing.

Luis Hernan was able to depict what WiFi actually looks like in his work entitled Digital Ethereal using an Android app and long exposure photography giving back an amazing glimpse into the movement of the WiFI signals that follow us around virtually everywhere.

But multiple studies have revealed that cell phone radiation can cause cancer.

Did you know that the International Agency for Research on Cancer (IARC) classified radio frequency fields (including those from cell phones) as a possible carcinogen in 2011?

Finally, the dangers of cell phone use gained a lot of mainstream credibility in 2011 when the World Health Organization (WHO) admitted that cell phone radiation may cause cancer.

Hopefully the images inspire you to disconnect, and unplug from your cellular and mobile devices. Give your body some freedom from the constant bombardment of these frequencies.

If you could see those wavy signals, would you think twice before using WiFi?

The series Spirit photographs—Wireless spectre is a performative and photographic exploration of Hertzian Space. The pictures result from describing the space through a performance with the Kirlian Device, which transforms signal strength in light colour (reds for high intensity, blues for low intensity). Coupled with long exposure photography, it is possible to register the changing qualities of wireless networks.

I am wondering how these pictures change when photographing the new 5G wireless technology! Probably completely insane!

This Rembrandt Has Been Hiding a Surprising Secret For Centuries : ScienceAlert
Six Minutes of Intense Exercise Boosts a Crucial Molecule in Your Brain : ScienceAlert
Scientists Have a Plan to Turn Earth Into a Giant Observatory : ScienceAlert
Dozens in 7,000 Year Old Mass Grave Were Carefully Decapitated After Death : ScienceAlert
The Latest Milky Way Survey Shows Off an Incredible 3.32 Billion Celestial Objects : ScienceAlert