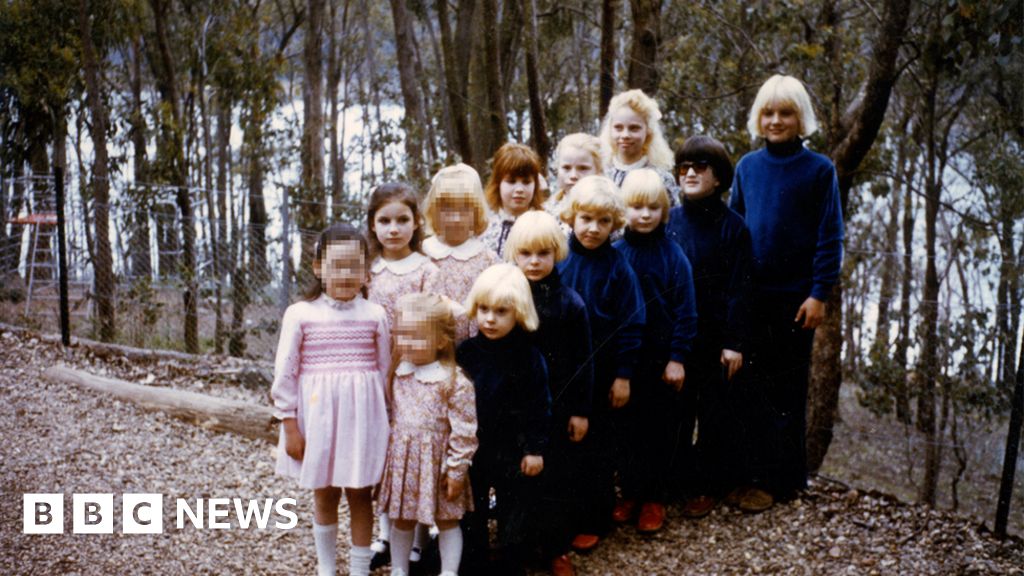 
For the first 15 years of his life, Ben Shenton lived in a doomsday cult that thought the world would soon end. Instead the police arrived one day and plunged him into a new and unfamiliar world… the real one.

Tucked away in their home on the shores of Australia’s Lake Eildon, behind heavy foliage and barbed wire, seven children in matching outfits and bleached blonde haircuts were finishing their morning hatha yoga practice when they heard a commotion on the stairs.

Suddenly uniformed police officers stormed into the room and gathered the children up. Moments later they whisked them away from the five-acre compound, into a new reality that would take 15-year-old Ben Shenton years to fully understand.

Up to that moment in August 1987, his world had been shaped by Anne Hamilton-Byrne, a glamorous and charismatic yoga instructor who, in the late 1960s, had persuaded her followers to join a cult she called The Family. Members believed that Anne was the reincarnation of Jesus Christ and that when the world ended they would be responsible for re-educating the survivors.

Ben and the other children were told that Anne was their mother. She taught them to avoid outsiders and if any approached them – on the shore of the lake perhaps – to follow the mantra Unseen, Unheard, Unknown. “It was very much a thing of: you do not tell any outside person who is not a sect member anything,” Ben says. “If I had any interaction with them, I would check through what I said to make sure that I hadn’t revealed anything.”

Members of Anne’s inner circle, known as “aunties”, helped look after Ben and the other children. They woke at 5am in dormitory-style rooms and followed an unchanging routine: yoga, meditation, lessons, yoga, meditation, homework, bed. Though there were only a handful of children when the police arrived in 1987, there had once been 28 of them.

They ate meagre vegetarian meals and were frequently punished. “Aunties” held children’s heads under water and hands above candles to the point of burning, while Anne, when she wasn’t away travelling, sometimes beat them with her stiletto heels.

“Watching it was enough to leave some serious emotional scarring,” Ben says. The atmosphere was one of “naked fear”.

One way Anne exerted control over the cult members was through drugs. Children were kept on a steady stream of sedatives such as Mogadon and Valium. Adults and older teenagers were obliged to take LSD at regular ceremonies called “clearings”; Anne thought that by this means she could strengthen her followers’ devotion to her.

While Ben did not enjoy his upbringing, it was all he knew. “When you create a reality for a child, they have no reference points,” he says. “There was no competing narrative.”

That instantly changed the day the police arrived.

Lying in bed that first night away from Lake Eildon, Ben combed through everything he had said that day, making sure he had divulged nothing that could get him in trouble. Suddenly, he realised – it didn’t matter any more. He was not returning to Anne. “I think for the first time in my life, I realised I was free,” he says.

But then the real work began.

Ben learned that his mother was not Anne, but an “auntie” he disliked named Joy. The children were not his brothers and sisters – some were the children of other cult members, others were orphans Anne had adopted. He was 15, not 14 as he had been told. And of course Anne was not the reincarnation of Christ.

At school, Ben struggled to fit in. When three of the more popular boys tried to take him under their wing, he pushed them away. That wasn’t surprising – children in The Family who showed signs of bonding were quickly separated, so friendship was something he hadn’t experienced. But even if he had, it would have been hard enough to relate to his schoolmates. “Often when you build a friendship with someone, you have common grounds, common interests or common opinions on things,” Ben says. “I had none of that.”

Ben struggled with depression and suicidal thoughts, reaching breaking point one night in 1988 during a school trip around central Australia. He was in tears when his teacher approached him, and reminded him that the other children had known each other since early childhood. “It’s going to take time. You’re going to have to learn how to relate to them,” he said. “They’re open to that, but job’s on you.”

Ben took this advice to heart. He began studying the way other people behaved, analysing the outcome of their actions, and drawing conclusions.

At the same time, he moved out of the children’s home and into a foster home, and started going to church. He began to feel increasingly at home in the new world. Eventually, he married and had two children, now aged 18 and 20. And he got a job at IBM, where he has remained for 22 years.

Along the way, Ben grew close to his grandmother – his mother’s mother – and would stop by her house often. His mother, Joy, lived overseas but also visited her mother whenever she came to town. In 2006, by chance, the two of them called on Ben’s grandmother at the same time.

They hadn’t spoken since Ben first learned Joy was his mother nearly two decades earlier. At that point, Joy told Ben she wanted nothing to do with him. He remembers her saying: “Don’t ever bother turning up at my doorstep, I’ll slam the door in your face.”

But Joy had mellowed, and religion had taught Ben forgiveness. “She had given Anne her word not to connect with me,” he says. “That didn’t mean there was no concern, desire to have a relationship or love.”

Joy had remained close to Anne, the founder of the cult, but from then on she kept in touch with Ben too.

While visiting Ben in 2012, Joy asked him a surprising question: would he go with her to visit Anne? By this stage, Anne was living in a care home and was being treated for dementia. She had never spent any time in jail. In fact, the only punishment she received was a $5,000 fine for falsifying papers for three of the children. There hadn’t been sufficient evidence to charge her with anything else.

Ben complied with Joy’s request, partly out of curiosity. But while Anne welcomed Joy warmly, she showed no recognition of Ben. As he leafed through a photograph album in her room, he quickly realised it was full of images from his childhood.

That was the last time he saw her. Anne died in June this year at the age of 97.

Although Ben says he won’t be “dancing on her grave” he felt a sense of release after her death. It’s his view that she remained engulfed in her own fantasies, and never had any regrets.

“Seeing her create a lie, perpetuate a lie and damage people… I knew that she was probably beyond what we call repentance,” he says.

All of the children of The Family suffered various degrees of damage, Ben says. With his steady job, wife and two children, he considers himself lucky.

Today he is looking to the future.

He has started a website, Rescue the Family, to educate people on cults, totalitarian organisations and the freedom of the will. He is also writing a book, Life Behind the Wire, which recounts lessons he learned from his childhood about the dangers of cult thinking.

“You try to unpack what happened and why, and make sense of it all,” he says.

“I’ve calibrated my life to reality.”

Anna LeBaron’s father, Ervil, was the leader of a polygamous cult responsible for more than 20 murders. The killings continued even after his death thanks to a hit list he had left behind. Here Anna speaks for the first time about how she escaped from the cult – and her hope to “redeem” the LeBaron name.

Anna LeBaron: How I escaped my father’s murderous polygamous cult

Study of 500,000 Medical Records Links Viruses to Alzheimer’s Again And Again : ScienceAlert
Babies May Not Be Born With a Microbiome After All, Scientists Say : ScienceAlert
An Expert Explains Why The Radioactive Water Stored at Fukushima Should Be Released : ScienceAlert
One Simple Idea Makes It Much Easier to Manage Your Weight Over Time : ScienceAlert
Dogs Can Be Aggressive For Lots of Reasons, And One of Them Is You : ScienceAlert