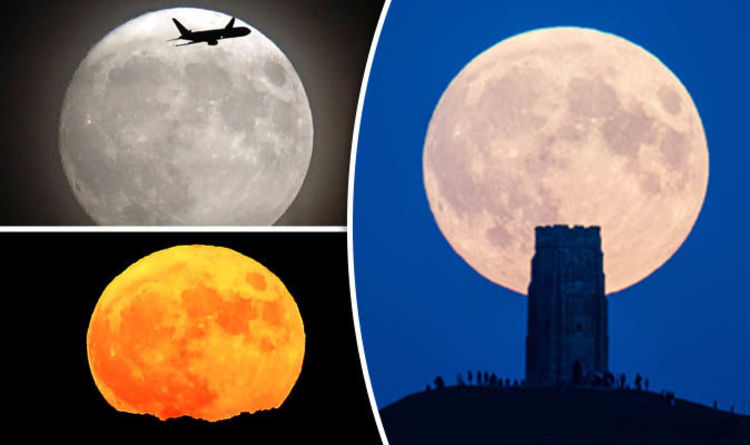 This will be the same supermoon but depending on which timezone you are in, it will appear at different times and on different days.

The second supermoon of January 2018 will be on January 31 and will be a total eclipse of the moon.

A supermoon is a new or full moon which closely coincides with perigee – the moon’s closest point to Earth in its monthly orbit, according to Earthsky.

The last supermoon on December 3 2017 was a treat for stargazers as a supermoon had not approached earth since November 14 2016.

During a supermoon event, the full moon can appear to be up to 14 per cent larger and 30 per cent brighter than on any other night throughout the year.

This is because the moon reaches it perigee, or closest point of approach to Earth.

The December 2017 supermoon was the first of three full moon supermoons in a row with the next two falling on January 2 and January 31.

Of this series of three supermoons, the January 2 supermoon will be the closest and largest.

Out of the 13 full moons and 14 lunar perigees occurring in 2018, the full moon on January 1-2 is the one that most closely aligns with lunar perigee – the moon’s closest point to Earth in its monthly orbit.

The moon turns full at the same time worldwide on January 2 at 2.24 Universal Time.

It will be the brightest supermoon in the series of three successive full moon supermoons and will light up the night sky from dusk to dawn.

The moon full rise around sunset on January 1-2, climb highest up for the night around midnight and set around sunrise.

The full moon on January 31 may also be called a Blue Moon because it is the second of two full moons to occur in one calendar month.

Patterns Formed by Spiral Galaxies Suggest The Universe’s Structure Isn’t Totally Random
We Just Got Even More Evidence Mars Once Had a Ring
A Pristine Pocket of Sky Has Been Identified as Possibly The Cleanest Air on Earth
They Did It! SpaceX And NASA Have Made History With First Crewed Launch
SpaceX Has Now Safely Delivered Astronauts to The Space Station