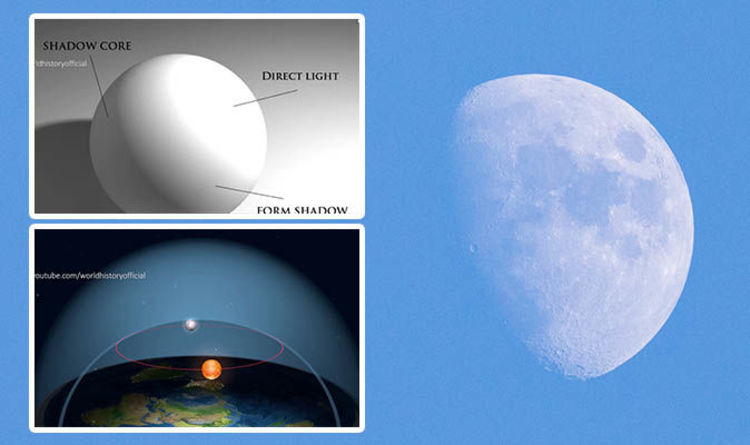 The largest full moon of the year will rise in the late evening hours on New Year’s Day to be briefly but intensely lit up by the sun’s rays.

The supermoon will be the first major astronomical event to kick off the year and will be soon followed by a combined supermoon and lunar eclipse on January 31.

But a bizarre YouTube video upload ahead of the spectacle of nature, claims to contain a concrete evidence about the concealed nature of the moon.

The video uploaded by the user World History Official, alleges that ancient civilisations knew that the moon was flat and NASA is currently deceiving the world.

World History Official says in the video: “The ancients always referred to the sun and moon as disks. They never said they were spheres.

“NASA perpetuate the sphere lie and tell us there is a dark side to the moon that no one here sees.”

In an attempt to ‘prove’ the bold claims, World History Official alleges that the moon’s spherical appearance is a subconscious projection, held up by the American space agency.

The moon is actually flat, the video underlines, but years of indoctrination have taken its toll on how humans visually perceive it.

But despite this claim, World History Official contradicts itself when it further alleges that some sort of refractive lens or medium 100km above the planet could be keeping up the ruse by altering the image of the moon in the sky.

Flat Moon hoax: A conspiracists claims that NASA have lied about the shape of the moon

World History Official then goes on to once again call on the wisdom of ancient civilisations, to demonstrate how the truth has been hidden in plain sight for centuries.

The video says: “The moon sits within a layer of liquid of some kind. This may sound strange, but when one studies the star in a jar, sonoluminescence, it is also something we cannot rule out too quickly.


“Note that the Moon Goddess Pamuya from the Native American Hopi meant water moon, and the moon Goddess Lasya from Tibet was a beauty who carried a mirror.

“Let us note that Genesis sees the model as a flat Earth with water above the firmament, but yes, the moon is within or below the firmament ceiling.”

Another questionable theory peddled by the video uploader, is that the moon does not reflect the sun’s rays, but is luminous by itself. 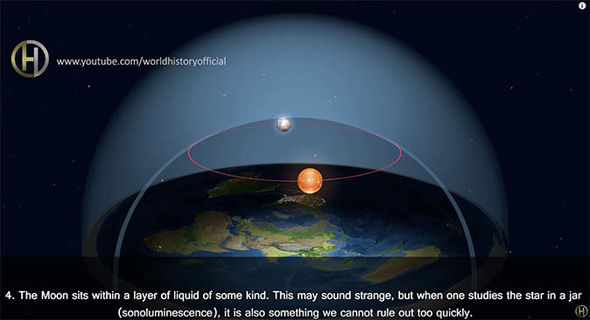 Flat moon theory: The YouTube video alleges that the moon is surrounded by a liquid barrier

But as outrageous as the claims in the video may be, World History Official fails to address the most obvious question about the theory. Why would NASA lie about the shape of the moon?

After all, the YouTube channel claims in its ‘About’ section, to be a “a powerful, innovative model for teaching world history.”

The simplest answer is that the claim is nothing more than an online hoax created by a flat Earth believer.

Scientists know that the moon is round, least of all because astronauts have set foot on it multiple times in the last century.

In fact according to NASA, civilisations as far back as the ancient Greeks around 500 BC could determine the shape of the moon.

Astronaut Edwin Aldrin walks by the footpad of Apollo 11.

A member of NASA’s StarChild team said: “I believe that it was Pythagoras who first proposed that the Earth was round sometime around 500 BC.

“Pythagoras reasoned that if the Moon was round, then the Earth must be round as well.”

The moon derives its egg-like shape from its rotation around the Earth, with its centre pointing towards the planet.

Space missions going all the way back to the Apollo, Clementine, Zond and Lunar Prospector have all proven once and for all, that both the moon and Earth are in fact round ­if somewhat elliptical.

An Experimental Surgical Robot Is Headed to The International Space Station
New Predictions Reveal The Fate of The World’s Biggest Ice Sheet if We Don’t Act : ScienceAlert
Record-Breaking Experiment Could Solve a Huge Challenge in Quantum Computing
Extreme Drought in Italy Reveals Hidden Bomb Submerged in River Since WWII
A Common ‘Forever Chemical’ Has Just Been Linked to Liver Cancer in Humans : ScienceAlert