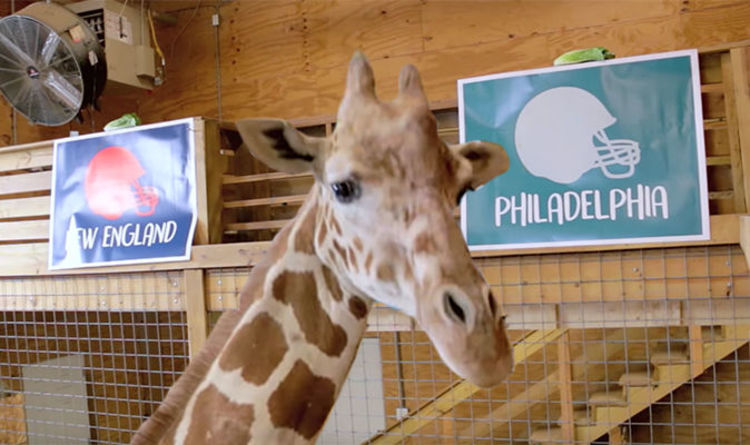 
The 52nd Super Bowl will kick-off at 23.30 GMT (6.30pm ET) on February 4 as the New England Patriots and Philadelphia Eagles battle it out for the NFL championship game.

Using animals to predict the sports results has become increasingly popular – Paul the Octopus, who was hatched from an egg at the Sea Life Centre in Weymouth, England, was famously credited with accurate predictions during the 2010 World Cup.

And now April the giraffe has revealed her pick for the Super Bowl LII.

April was given the choice of two posters, both had food placed above them, ‘New England’ was written on one and ‘Philadelphia’ on the other.

After a brief walk around her pen, according to footage shared by Animal Adventure Park, April revealed her prediction as selected she picked the food above New England.

Meanwhile, Fiona a baby hippo in Cincinnati Zoo, Ohio is set to reveal her forecast later today on “The Fiona Show,” which just began its second season on Facebook Watch.

“For her, the real choice is which of the boxes looks like the better toy and closest to something she would like to eat!”

According to a poll on the Cincinnati Zoo & Botanical Garden’s Facebook page, the majority of voters — 70 percent as of Wednesday — hope she’ll side with the Eagles, who are making their third-ever Super Bowl appearance.

The other 30 percent are hoping she’ll choose the Patriots, the reigning Super Bowl champions who are making their 10th championship game appearance, eight of which have come since 2001.