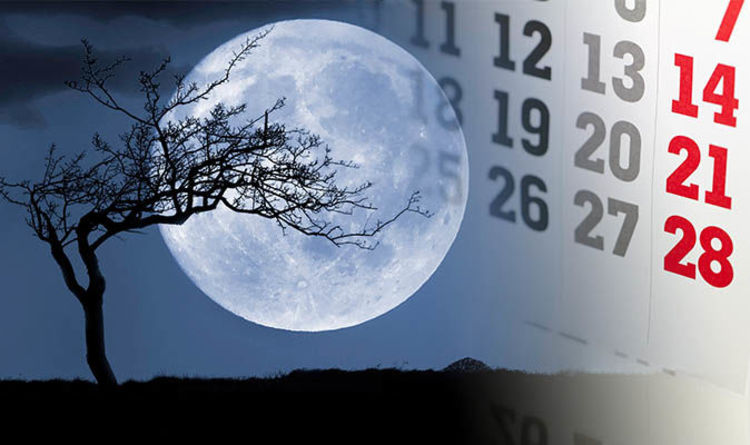 
The celestial phenomenon, which occurs on January 31, will combine three separate lunar spectacles – a blue moon, a supermoon and a total lunar eclipse.

Despite the famous saying, a blue moon rises every two years or so and occurs when two full moon fall in the same calendar month.

This will be joined by a supermoon, when the moon orbits closest to the Earth, making it appear about 14 percent larger.

If that wasn’t enough, there will also be a total lunar eclipse. The eclipse will make it a blood moon by giving it a reddish hue.

For spectators in North America, this will be the first time all three events occur simultaneously since 1866 – more than 150 years ago – though other parts of the world did experience a blue moon total lunar eclipse in December 1982.

Each of the separate events occur very sporadically so to have all three fall on the same day is an opportunity too good to miss for astronomers.

January 31 will mark the last in the space agency’s so-called ’Supermoon Trilogy’, the first of which rose at the start of December.

How to watch the Super Blue Blood Moon

The natural phenomenon will come together at 1.27pm Universal Time (the same as GMT), according to NASA.

The eclipse itself will last about 1 hour 16 minutes, starting from 12.50pm GMT.

Unfortunately, viewers in the UK won’t be able to see the eclipse in the flesh as it takes place over the Eastern Hemisphere.

Those living in the US look set to have better luck, with NASA advising Americans to set their alarms to before sunrise on the 31st.

Other regions in the path of the eclipse include the Middle East, eastern Russia, Australia and New Zealand, where the Super Blue blood moon will be visible during moonrise on the morning on January 31.

Gordon Johnston, program executive and lunar blogger at NASA, said: “Weather permitting, the West Coast, Alaska and Hawaii will have a spectacular view of totality from start to finish.

“Unfortunately, eclipse viewing will be more challenging in the Eastern time zone. The eclipse begins at 5:51 AM ET, as the moon is about to set in the western sky, and the sky is getting lighter in the east.”

For best viewing results, travel to a rural area away from any light pollutions and preferably somewhere with low cloud coverage.

Unlike their solar cousins, lunar eclipses are safe to view with the naked eye, though binoculars or a telescope could help you get a clearer view.

Thankfully, anyone who cannot watch the eclipse live, will be able stream the spectacle online.

The robotic telescope service Slooh will be livecasting the entire eclipse from 10.45am on the day.

Diamond From 660 Kilometers Below Earth’s Surface Reveals a Water-Rich Environment : ScienceAlert
Deep Brain Simulation Could Alleviate OCD When Other Treatments Have Failed : ScienceAlert
We Just Got Our Closest View of Europa in 20 Years, And We Can’t Stop Staring : ScienceAlert
A Rare Condition Makes Hair Truly Untamable, All Thanks to These Genes : ScienceAlert
Fossil-Filled Australian Caves May Be 500,000 Years Older Than We Thought, Study Finds : ScienceAlert