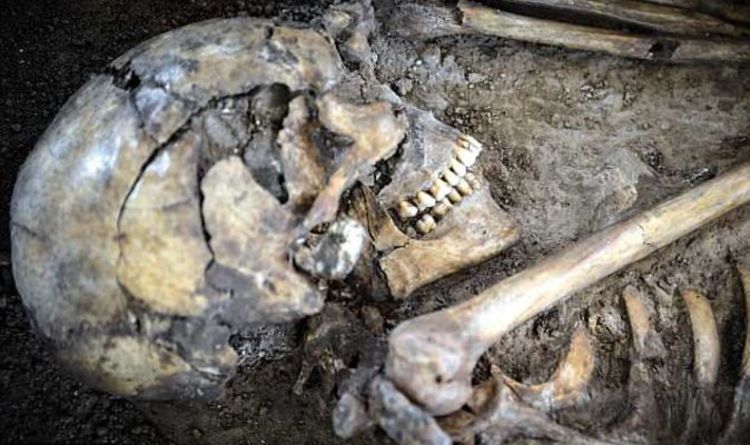 The so-called “Neolithic Y-chromosome bottleneck’ is evidence of a time at which human genetic diversity was markedly reduced, concludes the report, written by a team of researchers led by Tian Chen Zeng, a sociology undergraduate at Stanford University in California.

It appears over the course of the next 2,000 years, the Old World male population plummeted to one-twentieth of what it had been beforehand.

Mr Zeng and his team believe the population collapse was the result of a sustained period of battles between rival clans, whose membership was determined by male ancestors.

Scientists reached their conclusions using modern DNA and were unable to conclude how tribes might have fought it out, but neolithic remains suggested European tribes clashed using clubs, axes and arrows about 5,500 years ago.

By looking at genetic patterns in modern humans, the researchers concluded that the drop was only witnessed in men, specifically on the Y chromosome, which fathers pass on to their sons.

Such a conclusion would indicate that large numbers of men were dying before having children, indicating that the bottleneck was the result of a protracted period of war.

This suggested large numbers of men were dying before having sex and producing children which led researchers to suggest it could a result of generations of warfare.

The situation may have been compounded by the shift from a nomadic, hunter-gatherer lifestyle to more settled one based around farming and herding, which occurred roughly 12,000 years ago.

As a result, people began living in patrilineal clans, within which all males, unlike women, who may have married into the group, were related to one another, meaning they tended to have the same Y chromosomes.

As a result, repeated warfare could result in the wiping out of many male lineages and consequently their unique Y chromosomes, drastically impacting overall diversity.

Signs of violent assault are evident in human remains all across Europe, including Britain.

Specifically, a number of healed head injuries found on British remains appear to have been inflicted using club-like weapons, or possibly stone axes.

Researchers speculate that unhealed fractures inflicted very close to the time of death are consistent with a mixture of sharp-force and blunt-force trauma, possibly inflicted with stone axes.

Neolithic tribes probably competed for territory, as well as scarce resources such as food and shelter.

To test their ideas, researchers devised computer simulations in which men fought and died.

Crocodiles Seem to Be Thriving in a Toxic River That’s More Like a Sewer. Here’s Why : ScienceAlert
A Strange Thing Happens to Wolves Infected by Infamous Mind-Altering Parasite : ScienceAlert
Astronomers Spot The Biggest Galaxy Ever, And The Scale Will Break Your Brain : ScienceAlert
Psychologists Found a Weird Trick That Changes How Food Tastes : ScienceAlert
We May Finally Know How Lightning Gets Its Zigzag Shape : ScienceAlert