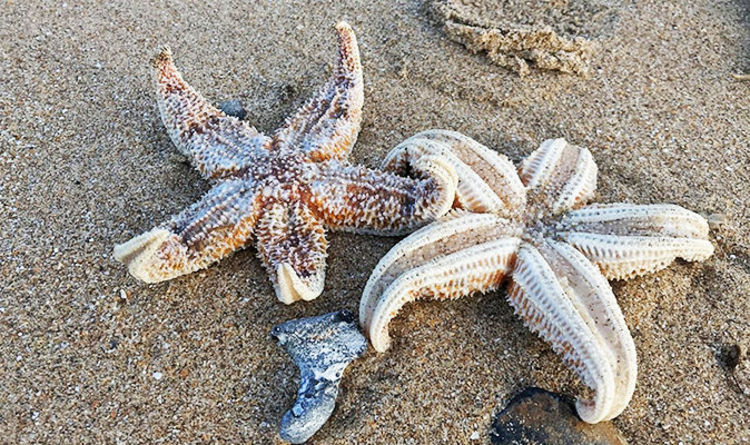 
Images of the starfish were captured in Kent by 47-year-old wildlife enthusiast Lara Maiklem while she was visiting the beach with her five-year-old twins.

The 47-year-old has said that it appeared as though “hundreds of thousands” of starfish were washed up on the beach.

She also claimed that the starfish stretched from Ramsgate to neighbouring beaches in Broadstairs.

Seagulls and other birds were also discovered to be among the dead wildlife.

Ms Maiklem said: “It was incredible. There were starfish as far as the eye could see, there were fish in there and sea urchins.

“I think someone found a lobster in there as well – and some false teeth. It was amazing. I live on the coast but I spend most of my time in London mudlarking in the Thames.

“I had heard about the starfish so I went down. There were quite a lot of people. I think they were first swept up yesterday and somebody told me they were there.

A mudlarker is a person who scavenges in river mud for objects of value.

Ms Maiklem shared the images of her beach discoveries on her London Mudlark Facebook page, which has more than 30,000 followers.

Speaking of the ‘Beast from the East’ phenomenon and its effect on the wildlife, she added: “The beast killed quite a lot of creatures. We saved as many as we could but it was like the Armageddon.”

Yesterday it was reported that the final cost of Storm Emma and the Beast of the East stood at £5billion.

It is thought the Beast from the East has cost about £1billion a day, according to The Centre for Economics and Business Research.

The number of weather-related deaths rose to 14 on Saturday.