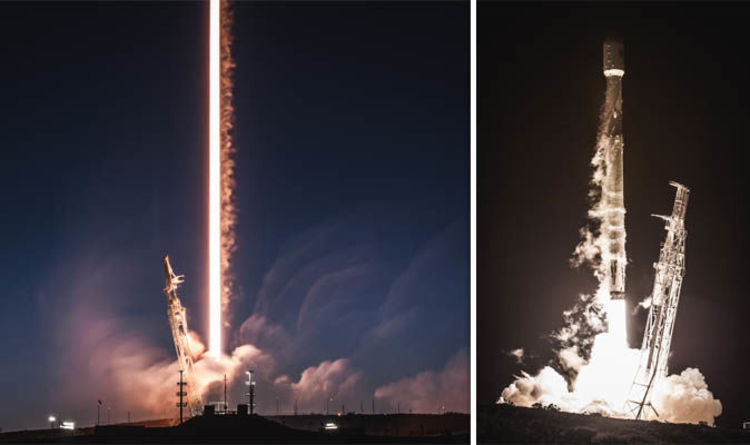 
The Hispasat 30W-6 satellite will blast off from the Kennedy Space Center in Cape Canaveral, Florida, sometime after midnight on Tuesday.

The rocket manufacturer pencilled in a two-hour launch window, starting at 12.33am EDT (5.33am GMT), after a pressurisation system issue postponed the launch.

Earlier last week SpaceX finally confirmed the pressurisation problem was resolved but liftoff was held off to give room for the NASA Atlas 5 weather satellite launch.

The pressurisation system on the Falcon 9 payload fairing shrouds the Hispasat 30W-6 during the critical first minutes of the launch.

SpaceX tweeted on February 24: “Standing down from this weekend’s launch attempt to conduct additional testing on the fairing’s pressurisation system.

“Once complete, and pending range availability, we will confirm a new targeted launch date.”

The entire launch today will be streamed live online, on the official SpaceX YouTube channel.

If SpaceX gets the all clear for launch tomorrow, the satellite delivery will mark the 50th flight mission for the company’s signature reusable rocket.

It only took the rocket manufacturer just over seven years to get to this stage. In comparison, the Atlas V rocket took nearly eight years and the space shuttle took more than 11 years to achieve the same feat.

SpaceX’s future in the skies was guaranteed in 2006 by NASA, when the US space agency signed an International Space Station resupply mission with SpaceX.

By 2016 NASA extended the contract by another six missions from 2019 onwards, and the Falcon 9 is now being prepped for future manned missions to the ISS.

But the Falcon 9 truly took off in 2017, when SpaceX carried out a total of 18 successful flights into space.

The company now aims to up the ante and fire off significantly more than just 20 rockets this year, and the Tuesday launch is the fourth of 2018 already.

It remains to be seen if the Falcon 9 will attempt to touch back down on Earth after today’s mission.

The Hispasat 30W-6 is slightly heavier than the Falcon’s typical payloads, which means the rocket will have to burn through more fuel to get it into geostationary orbit.

The Spanish satellite, is a commercial broadcast satellite capable of transmitting video, data and broadband from over 220,000 miles above the equator.

The telecom payload will replace an older, ageing satellite launched into orbit from Cape Canaveral in 2002.

Carlos Espinós, chief executive officer at Hispasat, said: “Hispasat 30W-6 is the fourth satellite that SSL has provided to our company.

“SSL has been a flexible and reliable partner in working with us on technological advances that make satellite communications more cost effective and enable next generation space systems and missions.

“We look forward to using Hispasat 30W-6 to expand our service offerings and capacity in the covered regions.”

The weather outlook for Cape Canaveral tonight is mostly positive with some threat of cloud cover at night.

One Simple Idea Makes It Much Easier to Manage Your Weight Over Time : ScienceAlert
Mysterious Medieval City in Africa Had a Genius System to Survive Drought : ScienceAlert
JWST Has Found Life’s Elemental Building Blocks in The Depths of Darkest Space : ScienceAlert
Hypertension Drug Shown to Extend Lifespan And Slow Aging in Animals : ScienceAlert
This Physicist Says Electrons Spin in Quantum Physics After All. Here’s Why : ScienceAlert