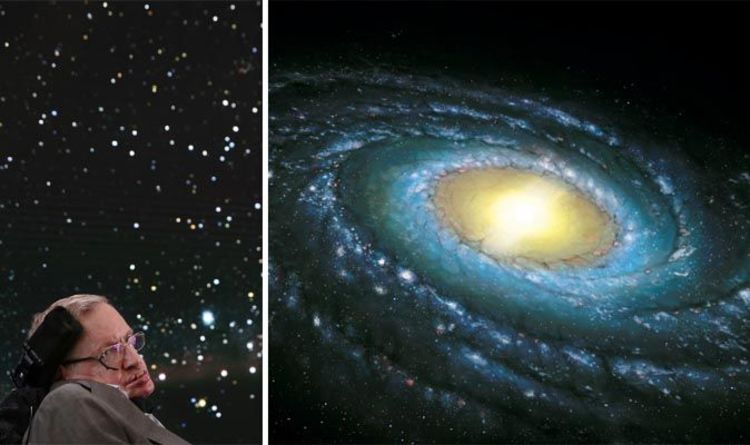 
In his final book Prof Hawking left behind a series of forecasts and warnings which could effect the human race.

One such problem is that Earth is becoming overpopulated and runaway climate change will destroy our planet.

For this reason, many experts such as Elon Musk and NASA have set their sights on colonising nearby celestial bodies such as Mars and the moon in order to ensure humanity’s future.

Prof Hawking, however, left behind much more ambitious missions, and believes in as little as 200 years, humans will have conquered interstellar travel and can begin colonising the Milky Way.

In his final book, Brief Answers to the Big Questions, Prof Hawking says humanity’s first stop outside of the solar system could be Proxima b – some 25 TRILLION miles away.

With todays technology, it could take up to three million years to reach the planet orbiting Proxima Centauri, but in 200 years it could take as little as a decade, says the former theoretical physicist.

Prof Hawking wrote: “Proxima b, for example, … is the closest exoplanet to Earth but still four and a half light years away, and recent research indicates that it has some similarities to Earth.

“Travelling to these candidate worlds isn’t possible perhaps with today’s technology, but by using our imagination, we can make interstellar travel a long-term aim – in the next 200 to 500 years.”

The former Cambridge professor also claimed in his book that God does not exist.

He described his claim there is no afterlife or higher power as a “profound realisation”.

Professor Hawking wrote in the newly-published book: “We are free to believe what we want, and it’s my view that the simplest explanation is that there is no God.

“No one created the universe and no one directs our fate.

“This leads me to a profound realisation: there is probably no heaven and afterlife either.

“I think belief in the afterlife is just wishful thinking.”

Plants Have Been Keeping a Secret From Us About How Thirsty They Actually Are : ScienceAlert
New Predictions Reveal The Fate of The World’s Biggest Ice Sheet if We Don’t Act : ScienceAlert
Astronomers Charted The Sun’s Life, And This Is How The Story Ends : ScienceAlert
A Common ‘Forever Chemical’ Has Just Been Linked to Liver Cancer in Humans : ScienceAlert
Extreme Drought in Italy Reveals Hidden Bomb Submerged in River Since WWII