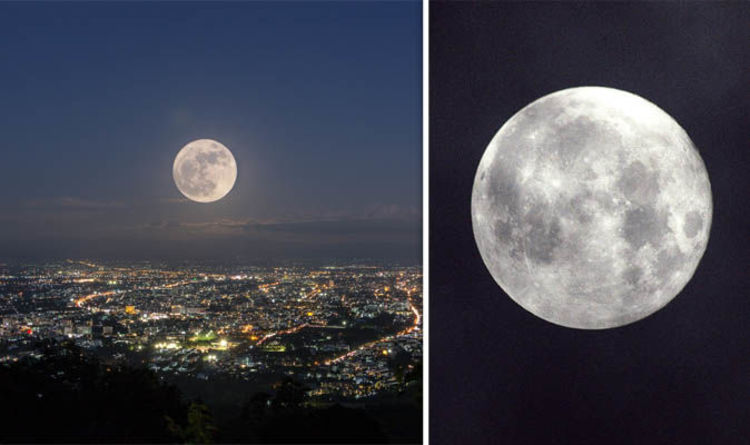 
Because the Moon has no light of its own, it has to rely on the Sun to provide its familiar white glow at night.

As the Moon orbits the Earth throughout the month, different amounts of its planet-facing side are illuminated.

In between these four phases, you will notice the Moon takes on a crescent shape, particularly just before and after the New Moon.

“As the Moon orbits Earth, the Sun lights up whatever side of the Moon is facing it. To the Sun, it’s always a full Moon.”

When is the October Full Moon?

The Full Moon will fully light up next week in the afternoon hours of Wednesday, October 24.

But stargazers hoping to catch a glimpse of the Moon will have to keep in mind their exact location and adjust accordingly.

When viewed from London for instance, the Moon will not rise over the horizon until 6.16pm BST.

Further up north in Glasgow, Scotland, moonrise is expected to occur a whole ten minutes later.

READ MORE: Halley’s Comet viewing: Orionid meteor shower peaks THIS WEEK but when is Halley back?

NASA said the Moon will appear full for about three days, meaning on the day before and after the Full Moon, you will be very hard pressed to see a difference in illumination.

The space agency said: “In lunisolar calendars the months change with the New Moon and Full Moons fall in the middle of the lunar month.

“This Full Moon falls near the middle of the ninth month in the Chinese calendar and Marcheshvan in the Hebrew calendar.

“In the Islamic calendar the months start with the first sighting of the waxing crescent Moon a few days after the New Moon.”

What is the meaning of the October Full Moon?

The name derives from Native American Algonquin tribes who named the different phases of the Moon to keep track of time.

NASA said: “According to the Farmer’s Almanac, with the leaves falling and the deer fattened, it is time to hunt.

“Since the harvesters have reaped the fields, hunters can easily see the animals that have come out to glean.

“The earliest use of the term ‘Hunter’s Moon’ cited in the Oxford English Dictionary is from 1710.”

Scientists Say ‘space Bubbles’ Could Shield Earth From The Sun, But Would It Work? : ScienceAlert
Astronomers Charted The Sun’s Life, And This Is How The Story Ends : ScienceAlert
For The First Time, Scientists Have Named a Heat Wave. Here’s Why It’s a Big Deal : ScienceAlert
This Seemingly Simple Foot Feature May’ve Allowed Sauropods to Become Giants : ScienceAlert
These Asteroid Particles May Be Our Most ‘Pristine’ Sample of The Outer Solar System : ScienceAlert