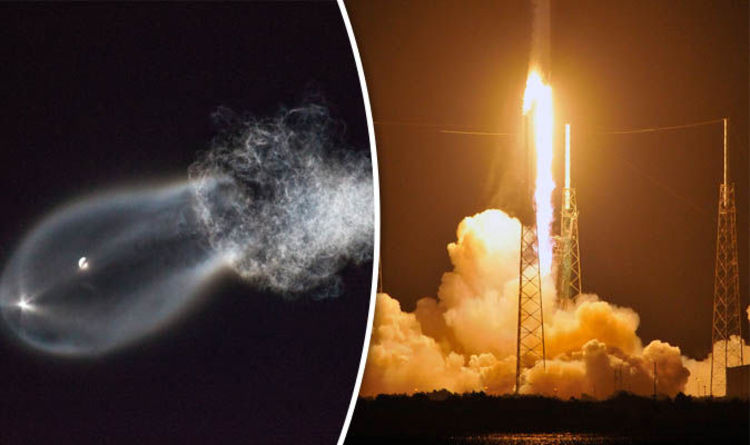 
SpaceX launched its Falcon 9 rocket, attached to the US satellite Zuma, from Cape Canaveral in Florida on Sunday at 8pm EST time following weeks of delays.

The details have been shrouded in mystery but Zuma is believed to a code name for a US Government spy satellite on a mission into low Earth orbit.

Despite a smooth launch, the mission reportedly turned to disaster as the Zuma spacecraft failed to reach orbit as expected.

Two US officials, speaking anonymously, said the spacecraft did not separate from the second stage of the Falcon 9 rocket as intended and is likely to have broken up or fallen into the sea.

One of the officials described it as “a write-off”.

Northrop Grumman Corp, which built Zuma and contracted SpaceX for the launch on behalf of the US Government, has declined to comment.

SpaceX spokesman James Gleeson said: “We do not comment on missions of this nature; but as of right now reviews of the data indicate Falcon 9 performed nominally.”

US authorities have also declined to comment on the mission. Zuma was launched on SpaceX’s Falcon 9 rocket from the Kennedy Space Centre in Florida.

The live stream, showing the launch, cut out just before this second stage as a measure to protect the nature of the Zuma mission.

SpaceX had tweeted during the live launch with accompanying pictures.

One of its final launch tweets, yesterday, said: “Falcon 9 first stage has landed at Landing Zone 1.

In November 2017, Express.co.uk discovered Northrop Grumman was involved in the project.

Lon Rains, communications director at Northrop Grumman’s Space Systems Division, confirmed that SpaceX was partnering with Northrop Grumman to carry out a Government contract in a bid to cut down space travel costs.

Mr Rains said: “The US Government assigned Northrop Grumman the responsibility of acquiring launch services for this mission. We have procured the Falcon 9 launch service from SpaceX.

“As a company, Northrop Grumman realises that this is monumental responsibility and have taken great care to ensure the most affordable and lowest risk scenario for Zuma.

“The Zuma payload is a restricted payload. It will be launched into Low Earth Orbit.”

Why Do Kids Get Worms, And What Can You Do to Prevent It? : ScienceAlert
For The First Time, Scientists Have Named a Heat Wave. Here’s Why It’s a Big Deal : ScienceAlert
These Asteroid Particles May Be Our Most ‘Pristine’ Sample of The Outer Solar System : ScienceAlert
You’re Probably Taking Your Pills Wrong, New Study Finds : ScienceAlert
This Seemingly Simple Foot Feature May’ve Allowed Sauropods to Become Giants : ScienceAlert