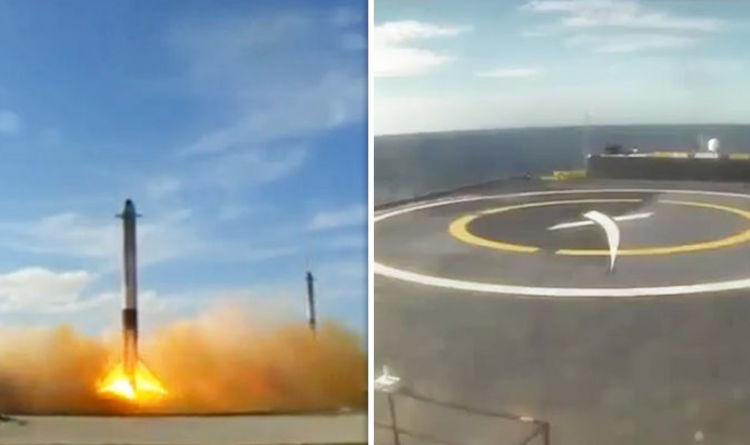 Tesla founder Elon Musk previously indicated that SpaceX’s central booster was the least likely to be returned out of the three.

The footage shows two of the three rocket boosters landing on SpaceX landing pads, touching down around 1000 feet apart from one another.

The third booster was expected to land on a barge several miles out at sea. Footage shows a large cloud of smoke as the third rocket booster covers the deck of a drone ship in shrapnel.

Mr Musk later told a press conference: “It was enough to take out two thrusters and shower the deck with shrapnel.”

The crash was caused by the booster’s insufficient propellant as it made its descent.

The rocket boosters assist the main rocket engine, and mid-flight they break away and fall back down to earth.

SpaceX launched a recyclable rocket capable of being reused in the future.

The SpaceX Falcon Heavy, The is the world’s most powerful rocket, suffered several delays prior to its final launch.

It took off from Florida’s Kennedy Space Centre at 3.45pm EST (8.45pm GMT) on Tuesday, February 6 propelled by 27 rocket engines.

The SpaceX launch was cheered on by 2000 spectators as the rocket began its journey into space.

SpaceX CEO Elon Musk called the launch a “big relief” after he had previously claimed there was only a 50 percent chance of liftoff for the rocket.

The billionaire businessman sent the electric car into orbit because normal tests are too “boring”.

Robot Shows It’s Possible to Swim Through The Emptiness of a Curved Universe : ScienceAlert
Plants Have Been Keeping a Secret From Us About How Thirsty They Actually Are : ScienceAlert
The Moon Stole Something From Deep Inside Earth Eons Ago, and Scientists Can Prove It : ScienceAlert
Scientists Gave Young Mice The Blood of Old Mice. Then Things Got Weird : ScienceAlert
This Seemingly Simple Foot Feature May’ve Allowed Sauropods to Become Giants : ScienceAlert