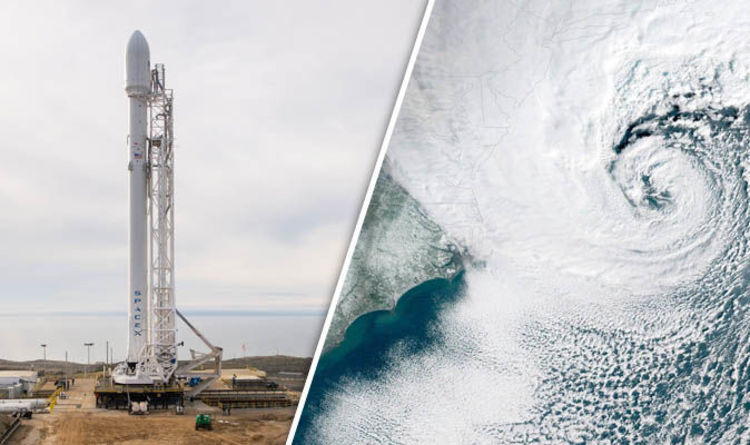 
Its top-secret Zuma payload was originally due to be sent into space onboard the rocket on Thursday evening.

The launch was then delayed to tonight between 8pm and 10pm Eastern Time (1am and 3am GMT).

But SpaceX said the take off, from Nasa’s Kennedy Space Center in Florida, has now been pushed back to Saturday.

“Extreme weather slowed operations but Falcon 9 and the Zuma spacecraft are healthy and go for launch—now targeting January 7 from Pad 40 in Florida.”

The weather bomb cyclone, known as a bombogenesis, is sweeping across the east coast of the US, including New York, North Carolina, Georgia, Virginia and Florida.

Measurable snow was recorded in Florida for the first time since 1989, and power has been lost as far south as northern Florida.

Philidelphia in Pensylvania declared a Snow Emergency overnight, meaning all parked cars must be moved off emergency routes for snowploughs.

New Hampshire is forecast to see temperatures plummet as low as -37.2C, which is colder than Mars, which reaches a high as -18.8C.

The delayed launch will add further to mystery surrounding the activity, with details kept quiet throughout the planning stages.

Aerospace engineers first aimed to have the rocket ready for mid-November, before being delayed to analyse data from a previous mission.

On Wednesday, SpaceX had confirmed that it had carried out a successful propellant test of the Falcon 9 on Pad 40 of the KSC.

The Zuma payload will be delivered into low orbit before the two stage Falcon 9 attempts to renter the atmosphere and touch down at one of SpaceX’s landing zones in Cape Canaveral.

SpaceX will then have a quick turnaround ready for January 15 when it launches its new Falcon Heavy – a larger rocket composed of three Falcon 9 boosters – for the first time.

The rocket manufacturer teased: “With more than 5 million pounds of thrust at liftoff — equal to approximately eighteen 747 aircraft at full power — Falcon Heavy will be the most powerful operational rocket in the world by a factor of two.”

The Falcon Heavy will blast off on its maiden voyage with Elon Musk’s cherry red Tesla Roadster on board for a “billion year” orbit around Mars.