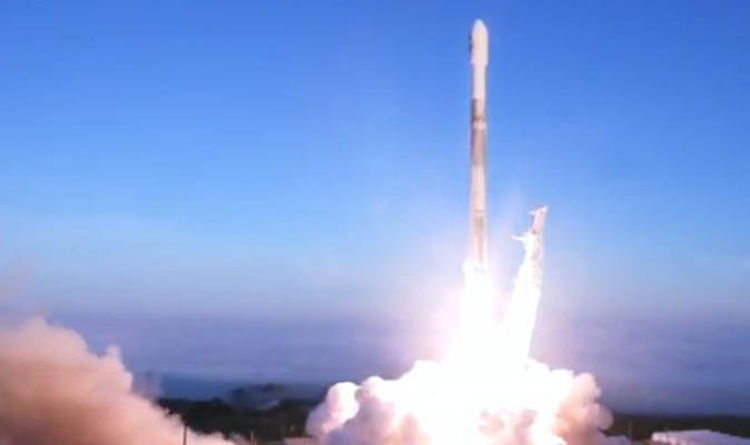 
The Falcon 9 rocket launched 10 Iridium Next satellites into orbit from SpaceX’s Space Launch Complex-4E pad at Vandenberg Air Force Base in California.

Liftoff was set for 10.13 am EDT – meaning the takeoff took place just after sunrise on the West Coast.

Today’s mission, called Iridium-5, will be the fifth of eight SpaceX flights which aim to a create a constellation of 75 Iridium Next satellites in space by mid-2018.

When complete, the constellation will consist of 66 operational satellites and nine spares in orbit.

You can watch the launch on the SpaceX website here.

SpaceX launched the first four missions, which totalled 40 satellites, in 2017.

And today, the latest set of Iridium satellites were also fired into orbit using a sued Faclon 9 rocket.

The space company will attempt to catch the fairing, the nose cone on top of the rocket, using a high speed boat known as Mr Steven.

Founder Elon Musk tweeted after the Febuary 22 launch from Vandenberg that the boat missed catching the fairing “by a few hundreds meters.:

He added the fairing slowed down enough to land “intact” in the Pacific Ocean.

SpaceX initially aimed to launch the Iridium-5 mission Thursday (March 29), but a technical glitch with one of the satellites forced a delay.

The glitch was resolved on Tuesday.

“Falcon 9 and payload are healthy—the teams at Vandenberg are now targeting Friday, March 30 at 7:13 a.m. PDT for the launch of Iridium-5,” SpaceX representatives wrote on Twitter Wednesday.

Sword Mistaken For Replica Is Actually An Ancient 3,000-Year-Old Weapon : ScienceAlert
Lightning Strikes Create a Strange Form of Crystal Rarely Seen in Nature : ScienceAlert
JWST Has Found Life’s Elemental Building Blocks in The Depths of Darkest Space : ScienceAlert
This Physicist Says Electrons Spin in Quantum Physics After All. Here’s Why : ScienceAlert
Dogs Can Be Aggressive For Lots of Reasons, And One of Them Is You : ScienceAlert