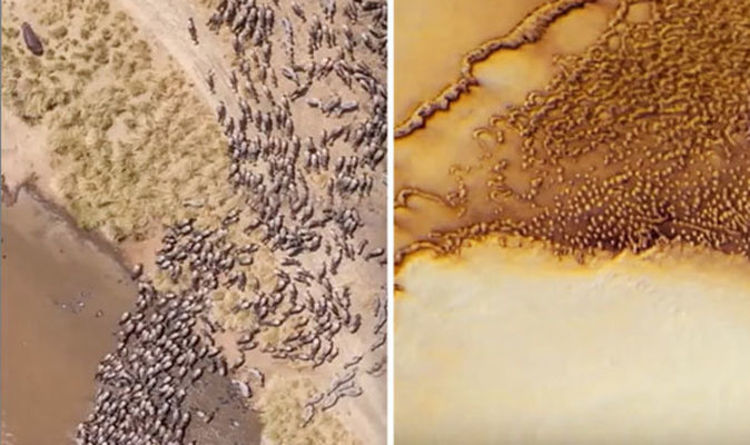 
A video uploaded to YouTube shows the pictures which show a cluster of objects on the planet’s surface spanning for miles.

And another angle appears to reveal other parts of the area rumoured to be feeding zones for the “alien animals”.

conspiracy theorist Neal Evans claims this is proof of life on the Red Planet — alongside an entire environment capable of supporting them.

He said: “I believe this to be a habitable lush thriving ecosystem on Mars.

“I studied the section of map for hours and compared it to birds eye views of places on earth, and it seems to be next to the north pole.

“The images are all low resolution, but you can see clear water lines, lakes, either vegetation or some type of life forms seeming to be dependant on the water source.”

He posted the original footage to his YouTube channel — named Disclose Screen — where he has received thousands of views, Dailystar.co.uk reports

Viewers were gobsmacked by what they saw.

One comment read: “We have seen bases on Mars, and a space fleet and now they are growing stuff.”

And another added: “Well spotted. A real eye opener. Hard to begin to imagine what is out there, and what discoveries will be made in life times to come.”

Mr Evans added: “I have been studying Mars and its story for years — we only know what they allow us to know.

“It’s hard to say if this could be new life or a new thriving life, my guess is from what i have mapped out this could be a new ecosystem like an early earth, prehistoric life that naturally formed or had a kick start from who knows?”

“Mars is a treasure trove of ancient history and mind blowing discoveries new and old, if Mars was obliterated due to a nuclear impact it was done for a reason.”

NASA says the truth is hat there simply is no life on Mars.

Close up images taken by rovers on the planet show barren landscape.

The US space agency says the Red Planet was stripped of its atmosphere by solar storms from the sun billions of years ago, and it therefore lost all its oceans and can not sustain life.

There are traces of surface water and ground water left that it believes may be able to support the most simplistic life forms but nothing has been found as yet.

According to sceptics Mr Evans is likely to be suffering with pareidolia – a phenomenon when the brain tricks they eyes into seeing familiar objects or shapes in patterns or textures.

The objects in question are just likely to be geological features of the Martian surface.

Ultra-Processed Food May Exacerbate Cognitive Decline, New Studies Show : ScienceAlert
We Used to Hate Commuting. Now We Realize We’ve Lost Something. : ScienceAlert
Incredible Footage Shows Planets Circling a Star Light-Years Away : ScienceAlert
A Splash of Milk in Coffee May Have Health Benefits We Didn’t Know About : ScienceAlert
Ancient Goo Spills The Secrets of How The Egyptians Mummified Their Dead : ScienceAlert