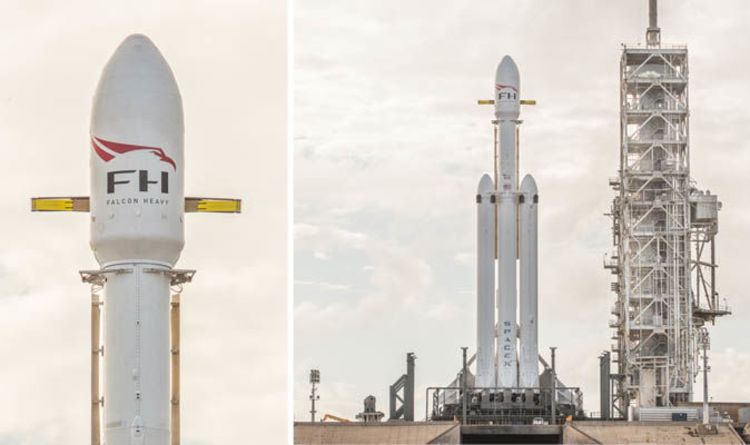 
Although SpaceX has shied away from setting a concrete launch date in stone, a static-fire test is expected around 9pm GMT (4pm EST) today.

Crews at the Kennedy Space Center in Florida have already loaded up the spacecraft with fuel and the rocket is standing vertical at Launch Pad 39A.

If Falcon Heavy successfully fires all 27 of its impressive engines, the monstrous rocket should be given the green light for lift-off later in January.

The Florida-based space centre said: “Currently this launch is targeted for no earlier than (NET) January 2018, with a date and time to be determined.”

The Falcon Heavy will be the single most powerful rocket to blast off from the space centre since the Apollo mission’s Saturn V in 1973.

Standing 70m tall and 12.2m wide, the Falcon Heavy boats an impressive ability to carry over 60 tonnes worth of payload into Low Earth Orbit and nearly 17 tonnes to Mars.

But the maiden launch has also gathered widespread interest thanks to its unusual choice of cargo.

SpaceX founder and billionaire Elon Musk has announced that he will fit the rocket with a cherry-red Tesla Roadster car – a car company he owns as well.

He said: “I love the thought of a car drifting apparently endlessly through space and perhaps being discovered by an alien race millions of years in the future.”

The tech entrepreneur has pledged to send the Roadster flying on a “billion-year” orbit with David Bowie’s Space Oddity playing on loop on the stereo.

The Falcon Heavy is the latest in SpaceX’s line-up of reusable rockets, and is in fact comprised of three Falcon 9 engine cores to a total of 27 engines.

Two of the first-stage boosters have already flown before on other space missions.

The goal is to bring human spaceflight back to the table by designing a rocket capable of potential human space missions to the Moon and Mars.

After launch, SpaceX will attempt to bring all three stages of the rocket back down to Earth. Two are set to land at Cape Canaveral and one in the Atlantic Ocean on a SpaceX droneship.

Once scheduled for launch, space boffins and astronomy fans can watch the rocket blast off in person at the Kennedy Space Center Visitor Complex. Visitors need to purchase a viewing ticket.

Alternatively, SpaceX will livestream the entire event through YouTube. Follow Express.co.uk to find out when the launch time and date is announced.

The Falcon Heavy launch comes alongside NASA developing its own ‘super-sized’ rocket, the Space Launch System or SLS.

Robot Shows It’s Possible to Swim Through The Emptiness of a Curved Universe : ScienceAlert
Researchers in South America Discover a New Species of Tiny but Tough Dinosaurs : ScienceAlert
Thinking Hard and Long Can Cause Brain Drain : ScienceAlert
Minor Google Meltdown Exposes The World’s Utter Reliance on a Single Tech Company
The Moon Stole Something From Deep Inside Earth Eons Ago, and Scientists Can Prove It : ScienceAlert