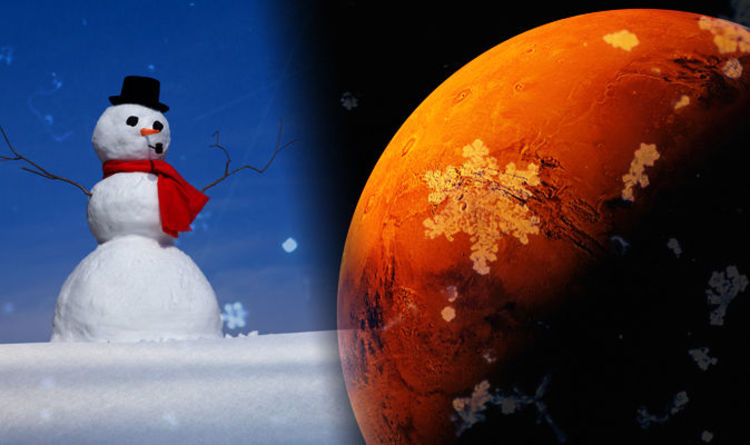 
It has already been proven that snow can fall on Mars thanks to the Curiosity 7 Mars Rover, but a 2017 study revealed that it can fall swiftly onto the Red Planet during storms.

Previous research shows that it snows every night on Mars as “ice microbursts” plummet onto the planet’s soil.

The Nature Geoscience study reads: “Although it contains less water vapour than Earth’s atmosphere, the Martian atmosphere hosts clouds. These clouds, composed of water-ice particles, influence the global transport of water vapour and the seasonal variations of ice deposits.

“However, the influence of water-ice clouds on local weather is unclear: it is thought that Martian clouds are devoid of moist convective motions, and snow precipitation occurs only by the slow sedimentation of individual particles.

“Here we present numerical simulations of the meteorology in Martian cloudy regions that demonstrate that localised convective snowstorms can occur on Mars. We show that such snowstorms—or ice microbursts—can explain deep night-time mixing layers detected from orbit and precipitation signatures detected below water-ice clouds by the Phoenix lander.”

Any snow that makes its way onto the surface of the Red Planet would soon evaporate.

According to Mr Spiga, once the sun rises on Mars any water ice on its surface would turn to vapour “unless it was in a very cloudy region or high latitudes”.

Meanwhile, back in 2011, it was revealed that Enceladus, one of Saturn’s moons, was home to incredibly icy conditions.

High-resolution maps of the moon showed an environment that could make a skiers paradise.

The discovery was made by NASA’s Cassini probe before it crashed into Saturn’s atmosphere years later.

Paul Schenk, of the Lunar and Planetary Institute in Houston, stated: “The discovery by instruments aboard the Cassini orbiter that there’s a currently active plume of icy dust and vapour from Enceladus has revolutionised planetary science.”

The snow of Enceladus was said to fall at a slow pace compared to Earth.

Scientists declared that it would take tens of millions of years for an estimated 100 meters of snow.

Enceladus is estimated to be 500 kilometres in diameter – the moon is roughly a tenth of Saturn in size.

Robot Shows It’s Possible to Swim Through The Emptiness of a Curved Universe : ScienceAlert
Minor Google Meltdown Exposes The World’s Utter Reliance on a Single Tech Company
Deep-Sea Sponges Can ‘sneeze’ Out Mucus, and The Footage Is Weirdly Mesmerizing : ScienceAlert
Scientists Gave Young Mice The Blood of Old Mice. Then Things Got Weird : ScienceAlert
Thinking Hard and Long Can Cause Brain Drain : ScienceAlert