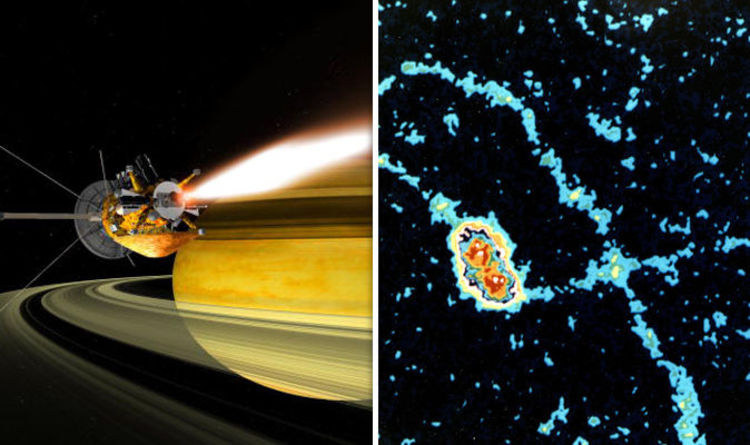 
The Cassini spacecraft approached the ice-covered Enceladus in 2005 for the first time as part of a mission to collect data on Saturn that will be analysed for years to come.

A team led by Frank Postberg and Nozair Khawaja of the University of Heidelberg in Germany claimed they had identified fragments of “concentrated and complex macromolecular organic material with molecular masses above 200 atomic mass units” in ice grains that were ejected from geysers through cracks in the moon’s icy plume.

Mr Potsberg said: “It is the first ever detection of complex organics coming from an extraterrestrial water world.

“Complex organic molecules do not necessarily provide a habitable environment, but on the other hand they are a necessary precursor for life.

“Previously it was unknown whether complex organic chemistry happens on Enceladus – and now we know.”

Dr Christopher Glein, a space scientist specialising in extraterrestrial chemical oceanography, said the new findings mean Saturn’s moon is the only celestial body besides from Earth known to “simultaneously satisfy all of the basic requirements for life as we know it”.

He said: “We are, yet again, blown away by Enceladus.

“Previously we’d only identified the simplest organic molecules containing a few carbon atoms, but even that was very intriguing.”

The new discovery is the culmination of years of data gleaned by Cassini as it flew close by Saturn’s moons, collecting information.

The Cassini joint mission between NASA, ESA and the Italian space agency came to an end in 2017.

The Cassini spacecraft was deliberately crashed into Saturn last year after running low on fuel.

Dr Hunter Waite, who co-authored the study at Southwest Research Institute said: “Hydrogen provides a source of chemical energy supporting microbes that live in the Earth’s oceans near hydrothermal vents.

“Once you have identified a potential food source for microbes, the next question to ask is ‘what is the nature of the complex organics in the ocean?’

“This paper represents the first step in that understanding – complexity in the organic chemistry beyond our expectations.”

The discovery was detailed in a newly published study in the journal Nature.

Humans Have Been Making Poison Arrows For Over 70,000 Years, Study Finds
We May Finally Know What Killed The Woolly Rhinos, And It Wasn’t People
Some Extreme Planets Have Lava Oceans, But Something Else Is Making Them So Bright
Mysterious Bright Spots on Dwarf Planet Ceres Point to Secret Underground Ocean
Here’s How Your Soft Hair Continues to Ruin Even The Sharpest Steel Razors