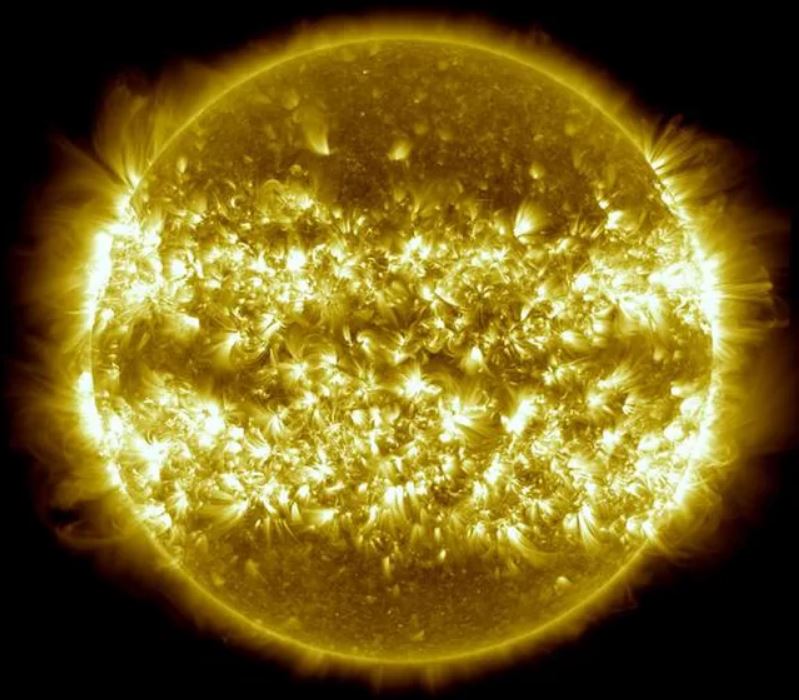 
Earth’s sun is totally epic. And scientists have newly discovered a new form of solar epicness you should probably be aware of.

When one solar cycle ends and the next begins, the sun may experience cataclysmic magnetic field collisions, also known as “terminator events”, resulting in gargantuan tsunamis of plasma that can charge across the sun’s surface for weeks at a time.

These solar tsunamis could be a missing link in the solar cycle, kick-starting the production of sunspots near the sun’s middle latitudes just a few weeks after they start to disappear near its equator.

“We have observed the sunspot cycle for hundreds of years, but it’s been a mystery what mechanism could transport a signal from the equator, where the cycle ends, to the sun’s mid-latitudes, where the next cycle begins, in such a relatively short amount of time,” said Mausumi Dikpati.

This new theory is based on two recently published scientific papers presented in Live Science:

For the first study, researchers looked at 140 years’ worth of solar observations taken from Earth and satellites. The scientists focused on the movement of coronal bright points — small loops of plasma that form over magnetic hotspots in the sun’s atmosphere; these points shine with extreme ultraviolet light before disappearing, usually within a single day. Unlike sunspots, which appear only during periods of high solar activity (known as solar maximums), bright points can occur during less-active periods (called solar minimums), providing a more comprehensive view of solar activity across cycles, the researchers wrote.

Tracking these bright points revealed an interesting pattern: They first appeared around 55 degrees latitude (about 20 degrees higher than sunspots tend to appear), then migrated toward the equator by a few degrees latitude every year. Once the points reached about 35 degrees latitude, they began overlapping with sunspots. The points and spots continued moving toward the equator in tandem for several years; when they got there, they all vanished in a “terminator” event. A few weeks after a termination, bright points always started popping up like clockwork in the sun’s mid-latitudes again.

Some physical feature of these terminator events seemed to be triggering the start of the next cycle in higher latitudes — but, what? Here’s where the tsunamis come in.

In the second paper, researchers explained how terminator events could end in the collision of two huge magnetic field lines near the sun’s equator, resulting in dual tsunamis of plasma.

According to the study, magnetic field lines like these — called “toroidal magnetic field lines,” because they stretch around the diameter of the sun in a donut (or toroid) shape — may be responsible for the emergence of bright points and sunspots as they move across the sun’s surface. It’s possible the field lines also serve as magnetic “dams,” the researchers wrote, trapping plasma behind them as they advance toward the sun’s equator.

When two opposing field lines (one generated by the sun’s north pole and the other by the south pole) meet at the equator, their opposing charges cancel each other out, resulting in what the researchers call “mutual annihilation.” The field lines snap, releasing the plasma trapped behind them in two massive tidal waves that rush forward, bounce off each other, and surge backward toward the poles in twin tsunamis, traveling 1,000 feet (300 meters) per second.

Within a week or two, these waves reach the mid-latitudes of either hemisphere, where they reach another set of magnetic field lines that are already drumming up bright points for the next solar cycle. When the tidal wave hits this new set of lines, it buoys those magnetic field lines up toward the surface, causing a surge in sunspot creation to accompany the bright points.

This, the researchers wrote, could explain the strangely consistent gap between the termination of one cycle and the start of the next. Computer simulations showed that solar tsunamis like this are theoretically possible — however, for now, they remain just a really cool idea.

Now, astronomers may soon have a chance to find real evidence of these solar tsunamis. Indeed, the sun is due for its next tsunami by 2020. OMG!