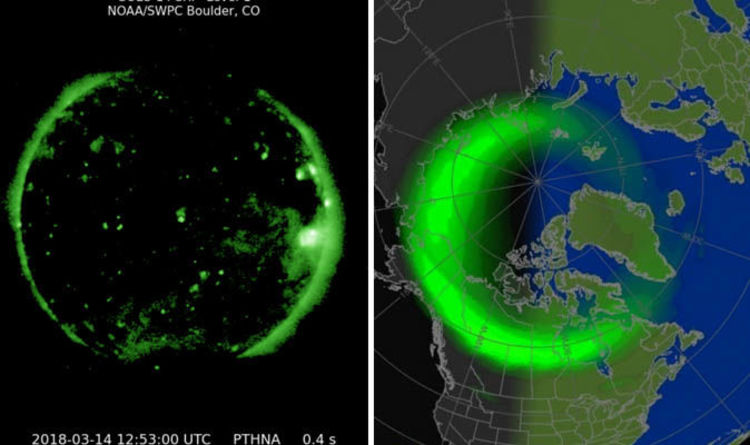 
A G1 geomagnetic storm watch is in effect for the next 48 hours after a monstrous tear in the sun’s surface open up last night.

The “canyon-like” hole was spotted on Wednesday by NASA’s Solar Dynamics Observatory (SDO) and is now under keen observation.

NASA says the effects of a geomagnetic storm will lead to the Earth’s magnetic field being “peeled open like an onion allowing energetic solar wind particles to stream down the field lines to hit the atmosphere over the poles”.

The effects can cause the planet’s magnetic field to rapidly drop between six and 12 hours, after which the magnetic field will take a few days to recover.

Scientists are warning that as the geomagnetic particles hit our planet, they could wipe out satellites, GPS navigations systems and mobile phone signals.

The arrival of the solar storm will also coincide with the formation of equinox cracks in the Earth’s magnetic field – this usually happens on March 20 and September 23 each year.

As a result, stargazers are more likely to be able to see the Northern Lights in parts of Scotland, Northern England as well as north Michigan and Maine in the United States.

What time will the Earth be hit by the storm today?

The US National Oceanic and Atmospheric Administration (NOAA), who spotted the solar storm using two NASA satellites, said: “A minor geomagnetic storm watch is now in effect for March 14 and 15. Aurora may be visible at high latitudes.”

NOAA’s current estimate is that the solar storm will be a G-1 or ‘minor’ storm – the highest end of the scale is G5.

NASA nor NOAA have not yet indicated what time the solar storm will hit yet, although G-1 activity is listed for both Wednesday and Thursday.