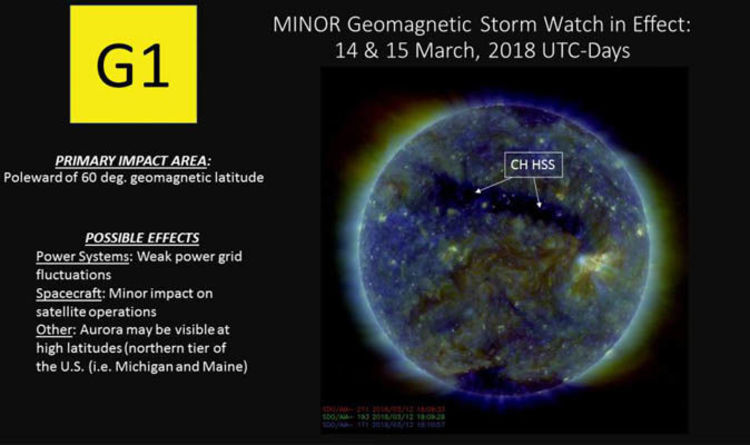 
A G1 geomagnetic storm watch is in effect for the next 48 hours after a monstrous tear in the sun’s surface open up last night.

The “canyon-like” hole was spotted on Wednesday by NASA’s Solar Dynamics Observatory (SDO) and is now under keen observation.

The massive coronal hole ripping through the sun’s surface can be seen in the latest SDO photos.

Coronal holes appear across parts of the sun where the magnetic field opens up to give way to intense solar winds.

Scientists have now warned the solar winds will slam into the upper hemisphere, which could produce Northern Lights in the northern parts of the planet.

But the worse is yet to come, with the US Space Weather Prediction Center (SWPC) warning of power grid fluctuations and impacted satellite operations.

“The arrival of a co-rotating interaction region (CIR), followed by a recurrent, negative polarity coronal hole high speed stream (CH HSS) is expected to cause the escalated geomagnetic responses.

For the most part, Earth’s natural magnetic field and atmosphere are enough to shield the planet from the harmful elements of outer space.

But every so often when solar activity spikes, solar winds manage to break through to the planet’s surface.

Typically this results in the spectacular Northern Lights which are triggered by the interplay of charged particles with oxygen in the atmosphere.

But in the most extreme cases, geomagnetic storms have been known to cause blackouts and even disorientate animals.

The current outlook is for a ‘minor G-1’ storm, but the storm watch could be upgraded to G-2 status depending on how the situation develops.

Coronal mass ejections (CMEs) typically eject from the sun at breakneck speeds between 250kms up to 3,000kms.

According to SWPC, the fastest CMEs can reach the planet in 15 to 18 hours.

A Splash of Milk in Coffee May Have Health Benefits We Didn’t Know About : ScienceAlert
Bar Graphs Induce a Hidden Bias in Interpretation, Experiment Shows : ScienceAlert
Astronomers Find What May Be a Habitable World 31 Light-Years Away : ScienceAlert
Incredible ‘Fairy’ Robot Sails on The Breeze Like a Floating Dandelion : ScienceAlert
No One Likes Commutes, But They May Actually Be Good For Mental Health, Study Finds : ScienceAlert