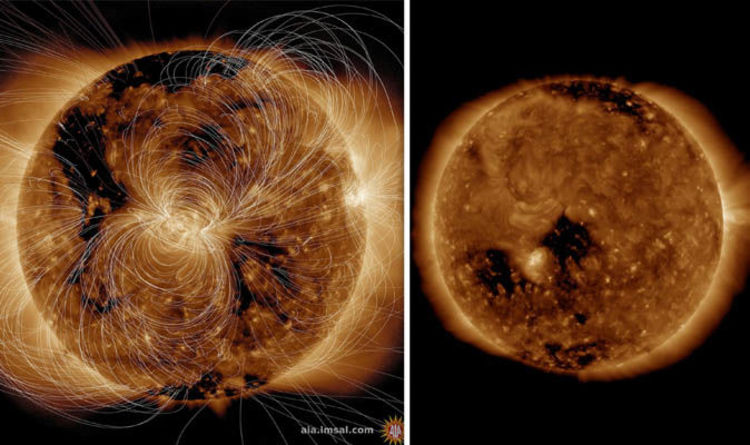 
A “ragged” hole in the Sun’s scorching atmosphere has turned towards Earth in the latest NASA Solar Dynamics Observatory (SDO) scans.

Astronomy website SpaceWeather warned the coronal hole is ejecting a stream of highly energised particles towards the planet.

The website’s astronomers expect the solar winds to arrive between Monday, August 20, and Tuesday, August 21.

For the time being there appears to be no immediate threat of increased geomagnetic activity or solar storms over the next two to three days.

At 1.30am BST on Friday, August 17, the US NOAA Space Weather Prediction Centre (SWPC) said it does not expect any “significant transient or recurrent solar wind features” in its three-day forecast.

Powerful streams of energy ejected by the Sun and carried on so-called solar winds can lead to solar and geomagnetic storms in the Earth’s atmosphere.

These space weather phenomena, depending on their severity, can cause minor power outages and even knock satellites out of commission.

At the moment, the SWPC does not expect any major impacts to radio communications and solar radiation from the coronal hole.

Instead, the solar winds could produce a much more pleasant result in the form of mesmerising aurora effects around the North and South Poles.

Auroras are caused by energised solar particles exciting oxygen and nitrogen in the atmosphere to release multi-coloured photons of light.

The news comes after NASA’s SDO mapped out the magnetic fields wrapped around the Sun.

“The bright active region right at the central area of the Sun clearly shows a concentration of field lines, as well as the small active region at the Sun’s right edge, but to a lesser extent.

“Magnetism drives the dynamic activity near the Sun’s surface.”

The Sun’s hot atmosphere is made of plasma – a mix of positively and negatively charged particles at high temperates – carried along the star’s magnetic lines.

When these magnetic fields burst open they produce a coronal hole in the Sun’s atmosphere, ejecting streams of particles into space.

These solar winds can travel at speeds of up to one million miles an hour or 400km per second.

According to NASA’s Marshall Space Flight Center, the Sun’s corona is so hot the star’s own gravity cannot hold onto it.

One week ago on the morning of Saturday, August 11, NASA blasted off the Parker Solar Probe to the Sun’s atmosphere to study the star’s corona and solar winds.

Narwhals Are So Weird, Scientists Used Chaos Theory to Explain Their Behavior : ScienceAlert
Astronomers Think They Know The Reason For Uranus’s Kooky Off-Kilter Axis : ScienceAlert
Deep Brain Simulation Could Alleviate OCD When Other Treatments Have Failed : ScienceAlert
We May Finally Know Why Oceans in The Southern Hemisphere Are Getting So Warm : ScienceAlert
It Turns Out There Is Such a Thing as Good Gossip, According to New Research : ScienceAlert