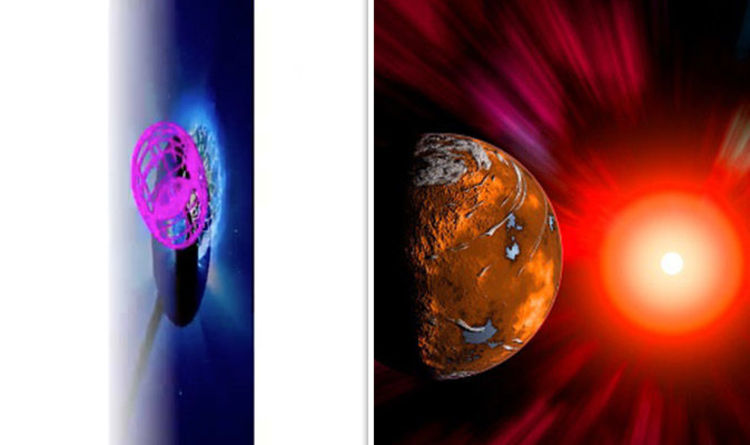 The new models will also improve space weather predictions which would help with the prevention of space-crafts and astronauts being endangered in space.

The new 3D view “confirmed long-held theoretical predictions of a strong shock near the CME nose and a weaker shock at the sides,” NASA officials said in a recent statement.

Their findings, published Feb. 13 in the Journal of Space Weather and Space Climate, also revealed the density of the plasma around the shock, as well as the speed and strength of the energized particles unleashed by the sun.

The statement also read: “Much the way ships from bow waves as they move through water, CMEs set off interplanetary shocks when they erupt from the sun at extreme speeds, propelling a wave of high-energy particles.

“These particles can spark space weather events around Earth, endangering spacecraft and astronauts.”

The US National Oceanic and Atmospheric Administration (NOAA), who spotted the solar storm using two NASA satellites, said: “A minor geomagnetic storm watch is now in effect for the 14 and 15 March 2018. Aurora may be visible at high latitudes.”

The storm will hit the Northern hemisphere and could result in the Northern Lights being as far south as Scotland.

But scientists have also warned how the solar storm could also affect GPS navigation systems and mobile phone signals tomorrow.

Babies May Not Be Born With a Microbiome After All, Scientists Say : ScienceAlert
Lightning Strikes Create a Strange Form of Crystal Rarely Seen in Nature : ScienceAlert
There’s a ‘Lost City’ Deep in The Ocean, And It’s Unlike Anything We’ve Ever Seen : ScienceAlert
Mysterious ‘Zone of Uncertainty’ Inside The Brain Reveals a Surprise : ScienceAlert
AI System Detects Strange Signals of Unknown Origin in Radio Data : ScienceAlert