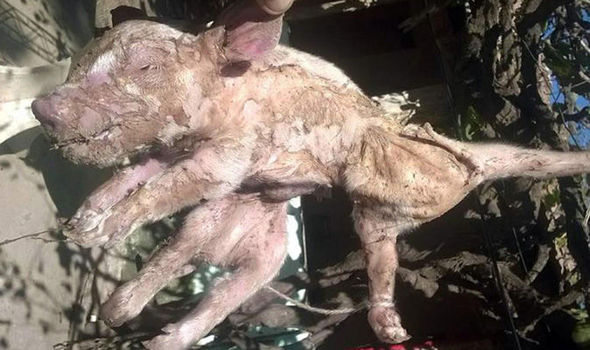 
The baby pig was born with severe mutations which meant that it had eight trotters – a grotesque real-life version of the famous ‘spider-pig’ of The Simpson’s movie.

Additionally, one of the piglet’s siblings was born with two mouths.

The piglets follow the bizarre birth of a headless puppy in the same area.

Santiago Valdez of El Galpon, in the north-west Argentine province of Salta, was amazed when he discovered that his sow had birthed a pig with eight legs, however he confirmed via social media that the piglet died shortly after birth.

The photos gained a lot of attention after Mr Valdez posted them online, but he claims that no expert was interested in analysing the biological phenomenon.

He said: “I have no idea why it happened. I was surprised that nobody had asked for it, to carry out investigations.

“But nobody asked for it, so I just threw it away.”

Several mutated animals have been born in South America in recent times, with one of the most notable being the puppy that was born with three legs and horns instead of a head.

Dog owner Jesus Chirinos Palenzuela of Venezuela was horrified when he discovered that a puppy from a litter of six was headless, and had three legs.

He said that the mutated dog was moving but only lived for a few minutes.

The dog Princesa (Princess), which belongs to Jesus, gave birth to the newborn that had something similar to a neck and at the end two ‘horns’ which he suspected might be underdeveloped ears.

Instead of two front legs it had a single leg that appeared to be the two front legs fused together, and the back legs had seven toes on one side, and eight toes on the other.

He said: “I was absolutely stunned and ran to my neighbours to let them know what had happened. They also didn’t believe me until they saw it for themselves.”

For The First Time, Scientists Have Named a Heat Wave. Here’s Why It’s a Big Deal : ScienceAlert
‘Gifted’ Dogs Seem to Have This One Characteristic in Common : ScienceAlert
Scientists Gave Young Mice The Blood of Old Mice. Then Things Got Weird : ScienceAlert
The Moon Stole Something From Deep Inside Earth Eons Ago, and Scientists Can Prove It : ScienceAlert
Robot Shows It’s Possible to Swim Through The Emptiness of a Curved Universe : ScienceAlert