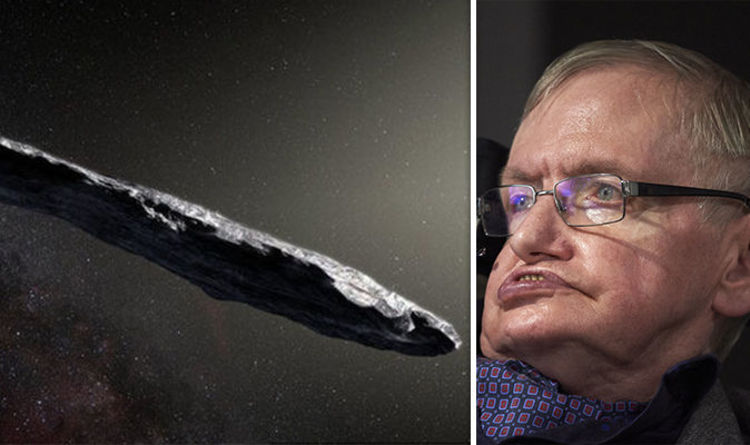 
The unusual object which is called an interstellar, first shot past Earth in October and caused excitement that it may be an alien space ship.

Scientists including Stephen Hawking have been baffled by the asteroid.

The Breakthrough Listen project announced in December they were planning on conducting more tests on the strangely shaped space object after the initial investigation revealed no sign of alien life.

However, now Mr Feng thinks he may have discovered Oumuamua’s origins.

He said: “My latest study gives us a glimpse of exactly where Oumuamua may have come from.

“Reconstructing the object’s motion, my research suggests it probably came from the nearby “Pleiades moving group” of young stars, also known as the ‘Local Association’.

“It was likely ejected from its home solar system and sent out to travel interstellar space.”

The bizarre rock is the first foreign object in our solar system to be spotted and it’s unknown how long it has been traveling for.

It was spotted by the Pan-STARRS1 telescope in Hawaii on October 19 and travelling at about 95,000 kilometres per hour.

The academic added: “I simulated how it has probably travelled through the galaxy and compared this to the motions of nearby stars.

“I found the object passed 109 stars within a distance of 16 light years.

“It went by five of these stars from in the Local Association, a group of young stars likely to have formed together, at a very slow speed relative to their movement.”

Mr Feng went on to explain that the interstellar has a particularly slow speed compared with most objects in the galaxy.

He adds that this suggests that is likely of a very young age and hasn’t travelled far as similar objects are likely to speed up with age.

Despite being the only interstellar spotted in the solar system, Mr Feng believes it is possible there are millions of similar objects we just haven’t seen yet.

He said: “My research suggests there are likely more than 46million similar interstellar objects crossing the solar system every year.

“Most of them will be too far away for us to see with our current telescopes.

“But new telescopes and surveys should soon be able to find these interstellar messengers, which may be sending us important information about how stars and planets formed.”