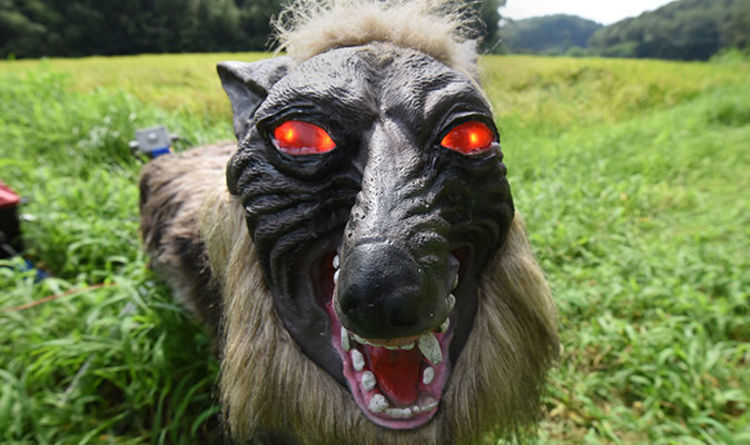 
The “Super Monster Wolf” robot looks like something out of dystopian science-fiction but it could revolutionise farming.

The robot costs around £3,480 (514,000 yen) and the Japan Agricultural Cooperative said significantly fewer crops have been lost under the robot’s protection.

It was deployed on a trial base near Kisarazu City in Japan’s eastern Chiba prefecture last July.

Chihiko Umezawa of the agricultural cooperative told Chiba Nippo news the device can cover around one kilometre and suggested it is more effective than an electric fence.

When it detects an animal approaching its eyes light up and it starts to howl.

Its manufacturers say the robot is solar-rechargeable and has a range of howl noises so that animal threats don’t get used to it.

It has 48 types of harrowing sounds, including wolf howls and a human voice.

AI could revolutionise the agricultural industry.

It was revealed last month that robot bees could be used to help pollinate crops.

Natural bee colonies are being wiped from pesticides, pollution and climate change.

Scientists created robotic “bees” to do the same job.

But Professor Shekhar from the US University of Minnesota warned of an apocalyptic scenario in which the robot bees could be hacked and turned into killers – similar to the Netflix series Black Mirror.

He said: “Hacking is a security issue so if the bees’ controls are hacked they can be put to a damaging purpose.

“All you need is a sting – and that sting can deliver a chemical.”

The bees will be remotely controlled with electric wings that pick up and deposit pollen.

Scientists are also working on technology to let them fly independently.

Professor Shekhar from the University of Minnesota said they will be fitted a GPS tracker which will allow them to take a particular route, visiting individual plants.