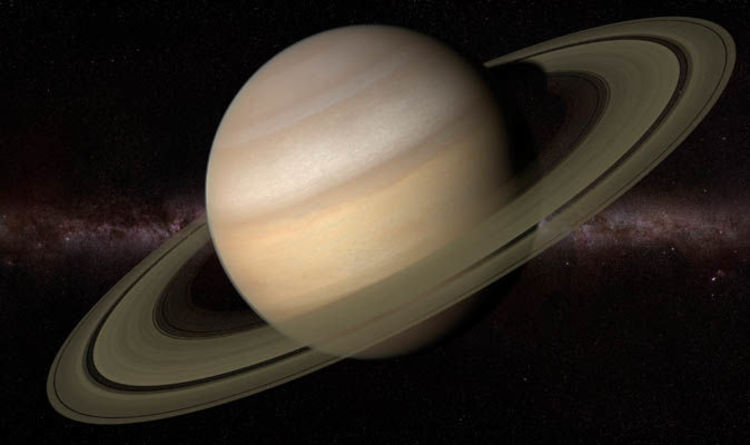 
The ringed giant will reach opposition on Wednesday, June 27, just a day before the Strawberry Full Moon.

During opposition, the gas planet will position itself directly across from the sky and will be at its closest to Earth.

In astronomy, opposition happens whenever two heavenly bodies are directly opposite each other, as seen from another point – typically Earth.

The celestial event will place Saturn in a good position for viewing in the constellation Sagittarius.

And the good news for stargazers is they should be able to see it with nothing more than a good pair of binoculars.

Astronomers at Royal Observatory Greenwich said: “With a decent pair of binoculars you’ll be able to see that the object you are looking at is not the standard circle shape of a planet.

“With a small telescope, though, this shape will sharpen into the stunning rings that surround the planet.

“Made of tiny pieces of ice and rock, the rings are tens of thousands of kilometres across, but only about ten metres thick.”

Additionally, amateur astronomers can also look forward to a breathtaking view of Jupiter this month, which is clearly visible in the western sky.

Saturn should be visible throughout the night during opposition.

Stargazers will need to focus their sights on the southern skies, just about 10 degrees over the horizon to spot the planet.

The planet will sit somewhere towards the top tip of Sagittarius’ bow up above the stars Nunki and Kaus Australis.

According to Dominic Ford, editor of InTheSky.org, the planet will be optimally inclined towards Earth to show off its ring.

The space boffin wrote: “Saturn will be angled to show its northern hemisphere at this opposition, and the rings will inclined at an angle of 26 degrees to our line of sight, which is almost the maximum inclination they can have.

“This means they will be very well presented.”

Later next month sky watchers can look forward to the second total lunar eclipse and Blood Moon of the year.

The lunar eclipse will see the moon pass through Earth’s show for one hour and 43 minutes – the longest lunar eclipse of the 21st century.

During the eclipse, sunlight scatted by Earth’s atmosphere will paint the moon a deep red to orange glow.

Astronomer Bruce McClure of EarthSky.org said: “The July 2018 full moon presents the longest total lunar eclipse of the 21st century on the night of July 27-28, 2018, lasting for a whopping one hour and 43 minutes

Chilling Glimpse Into Our Future if We Survive Another Million Years : ScienceAlert
Crocodiles Seem to Be Thriving in a Toxic River That’s More Like a Sewer. Here’s Why : ScienceAlert
10 Days After Its Launch, Orion Has Successfully Entered Lunar Orbit : ScienceAlert
The FDA Just Approved The Most Expensive Drug in The World : ScienceAlert
Cannabis For Pain Relief? Review of 20 Studies Provides Sobering Results : ScienceAlert