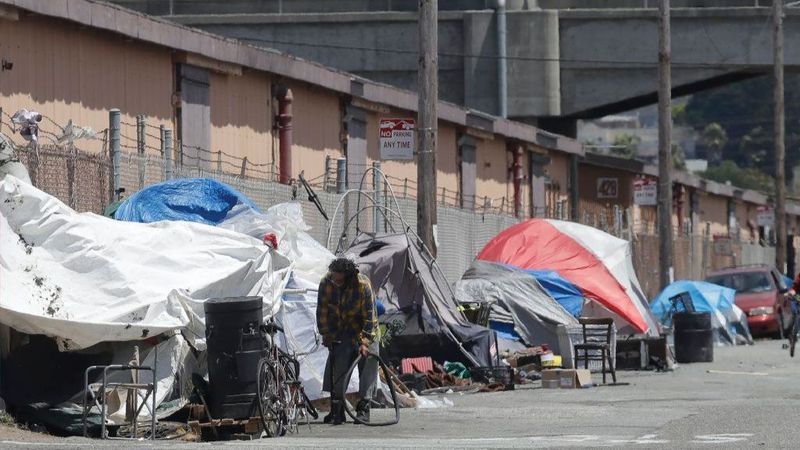 
Over the last several months, cities and counties across California have been releasing homeless counts.

The results are grim and San Francisco is no exception. Homelessness in a city that’s become a caricature of wealth inequality in the U.S. has increased by about 30% from 2017.

In May, the city released data that showed homelessness had jumped 17%. That was bad enough. Last week, a more complete accounting, known as a point-in-time count, showed the problem was even worse.

The count revealed that homelessness in a city that’s become a caricature of wealth inequality in the U.S. had actually increased by about 30% from 2017, when the last count took place.

The new numbers use a broader definition of what’s considered to be homeless that goes beyond what’s mandated by the U.S. Department of Housing and Urban Development. They include homeless people in jails, hospitals and residential treatment facilities.

That accounts for 1,773 people and, taken with the previously released number of 8,011, San Francisco has about 9,784 homeless residents.

City spokesman Jeff Cretan said that San Francisco had been collecting this additional data for years and that the information helps inform how the city responds to homelessness. Still, it’s the number required by the federal government of every jurisdiction that allows a city such as San Francisco to compare homelessness in their backyard with that in neighboring counties.

“We’re looking at the HUD numbers because it helps us work in collaboration with other places like Los Angeles or our neighboring counties,” Cretan said. “If Los Angeles or Alameda County did it our way, we could do a more direct comparison with those numbers that were released last week.”

San Francisco also considers people who live in the homes of family or friends and families living in single-room occupancy units as homeless, but they were unable to get a reliable count of those people. The federal government asks only for a tabulation of people who live in shelters and those living in areas where humans wouldn’t normally sleep such as the street, in a car, or in a train station.

In 2017, this combined number amounted to 7,499 homeless people. The city’s population of homeless veterans dropped 11%, while the number of chronically homeless increased 35% from 2017. The growth of people residing in RVs and campers was a big part of the reason the number of sheltered people increased as well

The new numbers reflect the dire situation that’s being seen in California communities even as the state spends millions of dollars to try and slow the growth of homelessness.

In Los Angeles, the point-in-time count released last month found that there are 59,000 homeless people countywide and 36,000 in the city. That count showed a 12% and 16% increase, respectively. Unlike San Francisco, Los Angeles’ count didn’t include people in hospitals, jails or residential treatment facilities — places where homeless people frequently find themselves.

Elsewhere in the Bay Area, the number of homeless people living in Santa Clara County jumped 31% over the last two years, from 7,394 to 9,706. San Jose saw its homeless count increase by 1,822 people, for a total of 6,172 homeless residents living in the county’s largest city.

Orange, San Bernardino and Riverside counties all recorded percent increases in homelessness in the double digits for 2019.

These point-in-time counts are required by the federal government as a way to assess how funding is distributed to battle homelessness. Some locales will then do additional counting in order to have a more fully formed picture of homelessness in their city or county.

These insane homeless counts across California just show the deviation of our society toward a complete collapse.