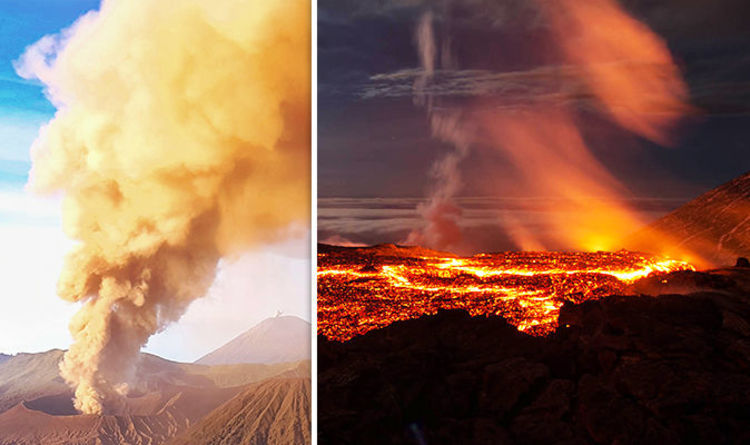 
The news has come after researchers from Stanford and Boise State University monitored rumbling sounds produced by moving magma.

Experts believe these sounds could assist them in developing a better forecasting system for some of the world’s most dangerous areas of tectonic activity, including Yellowstone.

The researchers, whose full findings have been published in the journal Geophysical Research Letters, came to their conclusions by tracking infrasound through monitoring stations on the slopes of the Villarrica volcano in southern Chile.

Villarrica volcano is one of the most active in the world and erupted once again in 2015.

The sounds produced had frequencies below the limit of human audibility and came from the lake of lava inside a crater at the volcano’s peak.

The noises changed according to the activity of the volcano.

When the lava lake is deep down in the volcano’s crater, the sound produced is of a lower pitch – “just like when a trombone is extended,” one of the researchers claimed.

Changes to volcanic sound were indicative of a swift rise in the lava lake level just before the major eruption that occurred in 2015, the research team found.

Tracking the noises in real-time as well keeping up-to-date on other information, such as seismic readings and gas emissions, could help experts to determine when a volcano is set to erupt.

However, the researchers are yet to affirm precisely how much of warning monitoring a volcano in this way would provide.

Leighton Watson, a graduate student at Stanford and the study’s co-author, said: “Our results point to how infrasound could aid in forecasting volcanic eruptions.

“Infrasound is potentially a key piece of information available to volcanologists to gauge the likelihood of an eruption hours or days ahead.”

Gargantuan explosions could devastate the planet, producing enough volcanic ash to cover an entire continent and causing weather chaos, as they could change weather patterns for decades to follow.

Last year, Jonathan Rougier, professor of statistical science at Bristol University, said: “Large super-eruptions would definitely have an effect. These would be extremely catastrophic and hard to deal with in terms of modern civilisation.

“We should also think about the effects super-eruptions would have on climate change and global warming.”

Eric Dunham, an associate professor of Stanford University’s School of Earth, energy and Environmental Sciences, added: “Volcanoes are complicated and there is currently no universally applicable means of predicting eruptions.

“In all likelihood, there never will be.

“Instead, we can look to the many indicators of increased volcanic activity, like seismicity, gas emissions, ground deformation, and – as we further demonstrated in this study – infrasound, in order to make robust forecasts of eruptions.”

Future research will aim to tie infrasound generation to other key variables when it comes to volcano monitoring and eruption forecasting, according to the researchers.