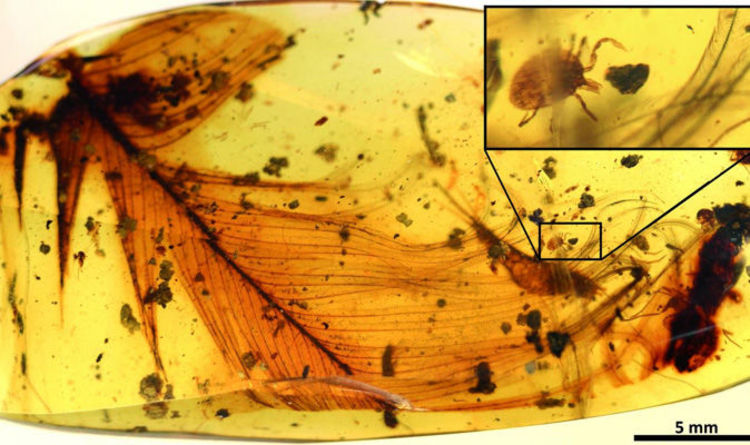 
In a discovery which is eerily similar to the opening scenes of Jurassic Park, experts found the fossilised blood sucking parasite trapped in amber.

The insect is actually a newly discovered species of tick, which has been called Deinocroton draculi or “Dracula’s terrible tick”, and would have fed on the blood of dinosaurs 100 million years ago.

The tick-encased-amber was discovered on the inside of a tree, and also enclosed was a small feather – which began to evolve on dinosaurs before they eventually evolved into modern day birds.

The University of Oxford calls this the “first direct fossil evidence of ticks parasitising dinosaurs.”

Dr Ricardo Pérez-de la Fuente, a palaeobiologist at Oxford University Museum of Natural History and one of the authors of the study describing the parasites, said: “The fossil record tells us that feathers like the one we have studied were already present on a wide range of theropod dinosaurs.

“Although we can’t be sure what kind of dinosaur the tick was feeding on, the mid-Cretaceous age of the Burmese amber confirms that the feather certainly did not belong to a modern bird.”

However, it is unlikely scientists will ever be able to know which dinosaur the blood came from.

The discovery is also unlikely to lead to a Jurassic Park-style theme park where the ancient beasts roam freely, as scientists are still unable to withdraw DNA from specimens preserved in amber fossil.

University of Barcelona researcher Dr Xavier Delclòs said: “Assessing the composition of the blood meal inside the bloated tick is not feasible because, unfortunately, the tick did not become fully immersed in resin and so its contents were altered by mineral deposition.”