ALIEN MYSTERY: A new chamber has been found in the Pyramid of Giza, but who built it?

The researchers said it constitutes the first major inner structure found in the Great Pyramid since the 19th century.

The sensational discovery has excited conspiracy theorists who are convinced the structures were built with the aid of visitors from an ancient but advanced race of alien visitors.

So far the team is baffled as to what the new room is for or whether it contains Egyptian treasures or artefacts.

Despite studying one of the most impressive monuments in the world for centuries, archaeologists are still unsure how the Great Pyramid, which stands at 146 metres tall, was built.

The discovery was made as part of the “ScanPyramids” project, which is using cosmic-ray imaging to map the interior of the great structures of Egypt.

The fact we don’t know exactly how they were constructed is one of the main arguments behind the theory an advanced civilisation was needed. Researchers discovered a ‘big void’ in the Pyramid by observation of cosmic-ray muons, that are only partially absorbed by stone, an empty space of at least 30 meters long that could be a possible hidden chamber

The shocking theory claims they were built much earlier than our history books tell us and that it was actually about 12,500 years ago when there were no civilised human societies on the planet.

The Ancient Aliens or Ancient Astronauts conspiracy theory claims that monuments like the great pyramids, or even Stonehenge, in Wiltshire, in the UK, could not have been created using the human technology available at the time.

So from this mystery, the theory takes the giant leap that it must have been advanced alien visitors who actually did it.

These other worldly visitors were then revered as Gods by our ancestors, who then worshiped them from these ancient monuments.

The outerworlds.com alien conspiracy theory website has a whole section dedicated to the argument that “aliens built the pyramids.”

The website states: “You know those big stone structures out in Egypt?

“The ones which were supposedly built to house the remains of dead pharaohs? 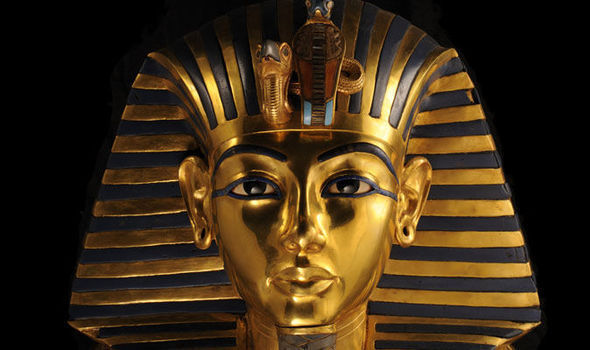 Were the ancient Egyptians aided in their building of the pyramids?

“The ones you thought were built by the Egyptians? Well, you are wrong.

“They were built by ALIENS!

“Let’s take a look at some undeniable evidence.”

The theory then claims that because two diagonal lines extend from the pyramids on either side of the Nile River delta, then the early Egyptians could not have known this when building them.

It states: “Here is what really happened: A couple of aliens, flying high enough over the Earth to be able to see where the Nile Delta’s origin is, easily saw what orientation the pyramid would need to be in order to have its diagonals lie on those two lines.”

The website also says the great pyramid lines up almost exactly with the magnetic North Pole.

It says: “How could the Egyptians possibly have built their pyramid facing the exact magnetic North Pole without even having a compass?

“Those aliens, abundant in their knowledge and drowning in technology, came along and using their compasses, they landed on earth and found the actual magnetic north and south poles. Then they built the pyramids.”

The website cites several further examples that it claims are proof that the pyramids were built so mathematically perfectly to align with celestial objects, it simply would not have been possible for our early ancestors to achieve this.

It uses a photograph of the Great Pyramid of Giza, and its neighbour, as seen from the Sphinx, on the evening of the summer solstice.

The Sun is seen setting in the exact centre of the two pyramids.

At the time, the Egyptians did not know the exact length of the year, or when the summer solstice was, it says.

It claims aliens would, however, have been able to calculate the longest day of the year. 
You know those big stone structures out in Egypt? The ones which were supposedly built to house the remains of dead pharaohs


The Sun also rises and traces the head of the sphinx on the winter solstice, the website points out.

It states: “The aliens, with their plethora of wisdom, came down in the year 10,500 BC and built the Pyramids and the Sphinx.

“They built it with a head of a lion to match the Belt of Orion, as well as the constellation of Leo.

“Thousands of years later, Ramses, the egomaniacal dictator-pharaoh of Egypt, decided that he didn’t like having the head of a lion on top of the statue in his land.

“So, he had a head in his own likeness constructed instead.”

The website suggests that if humans could not have done it, then superior aliens must have been involved.

But, on the flip side ancientaliensdebunked.com is as equally passionate about the evidence that humans could have built the pyramids when history tells us they were constructed.

In an article about the pyramids, the website says the so-called unfinished obelisk, is 1,000 tones and made of granite, but was abandoned midway through because a crack developed.

It said: “This stone, because it is unfinished, gives us direct insight into how they cut and shaped granite, as well as other stones.

“After the stones had been roughly shaped using pounding stones, they would begin to polish them with grinders.

“There have been many types of stone grinders, or polishers, found in ancient Egypt.

“About 85 per cent of the stone used in the construction of the pyramids was relatively soft sandstone which was quarried right on site.”

The site says there is evidence that wooden sleds with ropes made from papyrus were used to move stones.

It added: “I at least hope that by now most of us can see that these construction techniques are well within the capability of mankind to conceive and achieve without the intervention of aliens.”

For the discovery of the new void, scientists used an imaging technique called muon tomography that tracks particles that bombard Earth at close to the speed of light and penetrate deeply into solid objects.

Mehdi Tayoubi, a co-founder of the ScanPyramids project and president of the Heritage Innovation Preservation Institute, said: “This structure is not accessible, we don’t see (that) people tried, if you look at the Grand Gallery, to access the void which is above.

“So this void was hidden, I think, since the construction of the Pyramid, it was not accessible.

“We needed this technique – the right technique at the right time – to be able to identify it and discover it.

“What we are sure about is that this big void is there, that it is impressive, that it was not expected by, as far as I know, any kind of theory,”

”This is a premier.

“It was hidden, I think, since the construction of the pyramid.”

Hany Helal of Cairo University said: “We open the question to Egyptologists and archaeologists: what could it be?”