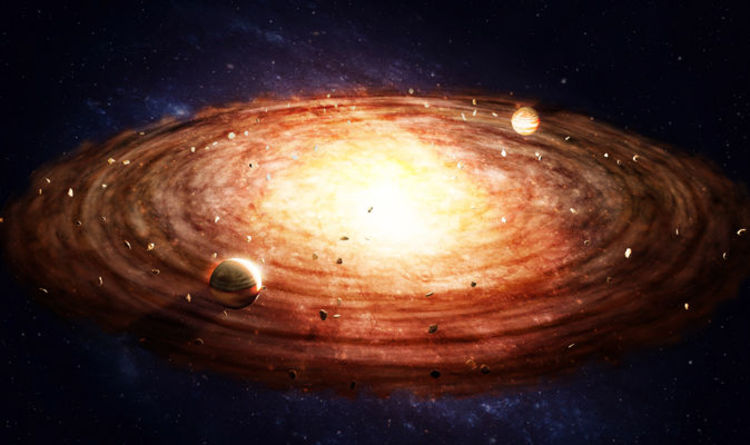 
Researchers say a distant rocky object could have been pushed into orbit by the gravitational power of another planet.

Planet Nine was first discussed in 2016, when a group of icy objects at the far edges of the solar system were found to be tilting in their orbits.

It suggested their directions were being influenced by the gravitational pull of an unidentified planet.

Now, a group of scientists think they have found a distant object that could be as big as a dwarf planet, but has a different orbit to most objects that are travelling around our sun.

When scientists created a simulation of the solar system containing all of the known planets, they could not explain the unusual orbit pattern.

But when they added a ninth planet with the characteristics of Planet Nine predicted by researchers, the numbers and orbits matched up.

Scientists have been searching for a planetary object beyond Pluto for some years, but this brings them closer than ever to proving its existence.

Professor David Gerdes, an astronomer at the University of Michigan and co-author on the paper, says the evidence makes it more likely that there is another planet in the solar system.

He said: “It is not proof that Planet Nine exists.

“But I would say that the presence of an object like this bolsters the case for Planet Nine.”

An astrophysicist who is trying to find Planet Nine, says that to believe that the planet does not exist “generates more problems than you solve”.

Dr Konstantin Batygin said: “There are now five different lines of observational evidence pointing to the existence of Planet Nine.

“If you were to remove this explanation and imagine Planet Nine does not exist, then you generate more problems than you solve.

Planet Nine has never actually been identified, but there are numbers of scientists ties to their telescope trying to prove its existence.

People in Portland Planted Trees. Decades Later, a Stunning Pattern Emerged : ScienceAlert
Study Attempts to Unravel The Best Ratio of Land to Ocean For Exoplanet Habitability : ScienceAlert
10 Days After Its Launch, Orion Has Successfully Entered Lunar Orbit : ScienceAlert
Octopus Brains Evolved to Share a Surprising Trait in With Our Brains : ScienceAlert
Chilling Glimpse Into Our Future if We Survive Another Million Years : ScienceAlert