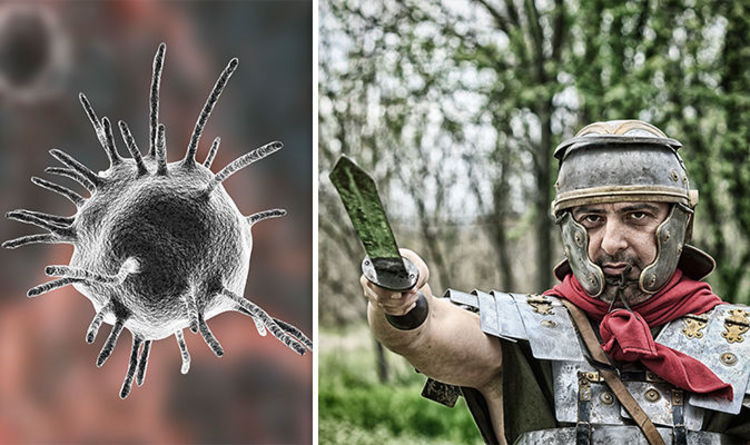 
The “plague” is a fungus called Berberis vulgaris which infects harvests of wheat and caused Romans to sacrifice their canines to appease the god of rust, which they thought was behind the infection.

Wheat stem rust caused crop failures for thousands of years until farmers noticed a link between the outbreaks and barberry shrubs, which were planted as hedges and harvested for their berries – leading to campaigns in Europe and North America to remove the bushes.

The last official outbreak of the plague was in the UK was 1955 but it has come back due to conservation efforts to preserve a rare species of moth called the carpet moth which live off the shrubbery.

Co-author of the study Paul Fenwick said the stem rust was an “ever-increasing threat across Europe”.

The plague was blamed for famines in Russia in the 1930s which killed up to 3million people.

In 2013 Stem rust infected crops in Ethiopia, Germany and Sweden and there was one infected plant was found in England.

The plague destroyed thousands of hectares of cereal crops in Sicily in 2016.

In 1999 there were only five places in England where carpet moths were known to have survived.

But today there are 11 colonies in Dorset, Gloucestershire, Hampshire, Oxfordshire and Wiltshire.

Researchers at the Norwich John Innes Centre warned this is a “perfect storm” for rust.

But the charity Butterfly Conservation said there was no conflict between saving moths and crops as long as the shrubs were planted away from arable fields.

Mark Parsons, of Butterfly Conservation, said: “We are very concerned about the potential risk from the possible re-establishment of stem rust in this country and the impact it could have on agriculture and the environment.

“The barberry carpet moth is an endangered species restricted to just a handful of sites in this country, it being reliant on common barberry for survival.

“We are, therefore, pleased to be working closely with the John Innes Centre both to minimize the potential risk from cereal rust, but also to enhance the populations of the barberry carpet, and therefore increase its chances of survival in this country.”

Deep-Sea Sponges Can ‘sneeze’ Out Mucus, and The Footage Is Weirdly Mesmerizing : ScienceAlert
Plants Have Been Keeping a Secret From Us About How Thirsty They Actually Are : ScienceAlert
Extreme Drought in Italy Reveals Hidden Bomb Submerged in River Since WWII
The Moon Stole Something From Deep Inside Earth Eons Ago, and Scientists Can Prove It : ScienceAlert
Robot Shows It’s Possible to Swim Through The Emptiness of a Curved Universe : ScienceAlert