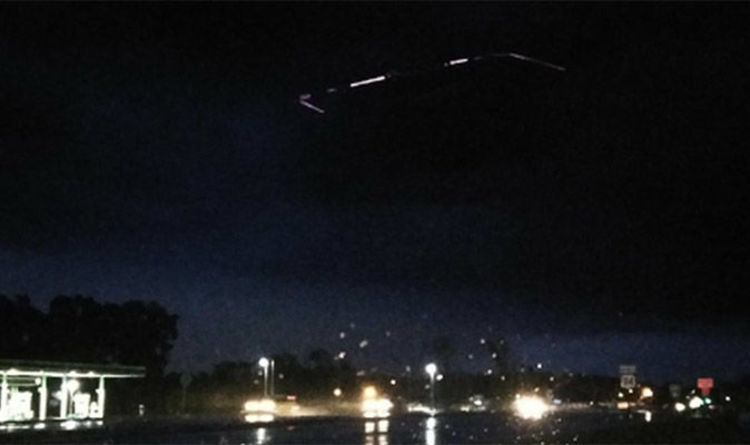 
Javion Hill, 35, posted a spooky snap of it on Facebook after seeing it on August 18. He claimed it was the second time he had spotted the futuristic aircraft.

The photo was taken during a storm in Charlotte, North Carolina last month and shows a pitch-black sky with what appears to be a flat, rectangular aircraft with lights around its edges hovering in the air.

UFO enthusiasts and conspiracy theorists have claimed it is an advanced type of spy craft known as a “TR-3B”.

But others claimed the image looks suspiciously like the reflection of a smart phone on top of the glove compartment when Mr Hill revelled he took the photo from inside in his car.

He told local newspaper the Charlotte Observer: “I was on my way home with my wife on the speaker phone, and it looked like there was a tornado coming, so I was trying to take a picture of the clouds for my wife.

“But then I saw something that wasn’t normal and I was, like ‘oh my god, what is that?’.

“I started trying to take as many pictures of it as possible while I was driving.”

Mr Hill said he pulled his car over and tried to get a video of it.

But the skies opened and rain came pelting down.

He said when he looked again, the craft had disappeared.

Mr Hill said he believed it to be a military aircraft or plane of sorts.

UFO conspiracy theorists have claimed that the US military is working on a secret anti-gravity spy plane that hovers, called a TR-3B.

But there are only rumours this type of aircraft exists, despite others claiming to have seen a similar type of aircraft over Antelope Valley in the southern California desert near to the Edwards Air Force Base.

Mr Hill said: “I was worried for my safety. I didn’t believe in UFOs until that moment.”

Mr Hill’s sighting came two weeks after a video emerged showing what appeared to be a strange object hovering over the Lake Norman area of North Carolina.

The footage was recorded by Jason Swing on May 29 but only emerged in August after doing the rounds on social media.

The video is very shaky but shows a large object hovering in mid air.

During the clip, uploaded onto YouTube, Mr Swing can be heard saying: “This is a spacecraft.”

The video is also explained by Mr Swing, who said in a post accompanying it: “It had been raining all morning. Rain finally stopped so we went to pick up a boat from Lake Norman.

“When (I) came around the corner I saw this thing sitting still very close.”

The video garnered 150,000 views before being picked up by the popular YouTube channel ‘The Hidden Underbelly 2.0’.

North Carolina is in the top ten US states for ‘UFO sightings’.

This Seemingly Simple Foot Feature May’ve Allowed Sauropods to Become Giants : ScienceAlert
The Moon Stole Something From Deep Inside Earth Eons Ago, and Scientists Can Prove It : ScienceAlert
Deep-Sea Sponges Can ‘sneeze’ Out Mucus, and The Footage Is Weirdly Mesmerizing : ScienceAlert
Scientists Gave Young Mice The Blood of Old Mice. Then Things Got Weird : ScienceAlert
New Predictions Reveal The Fate of The World’s Biggest Ice Sheet if We Don’t Act : ScienceAlert