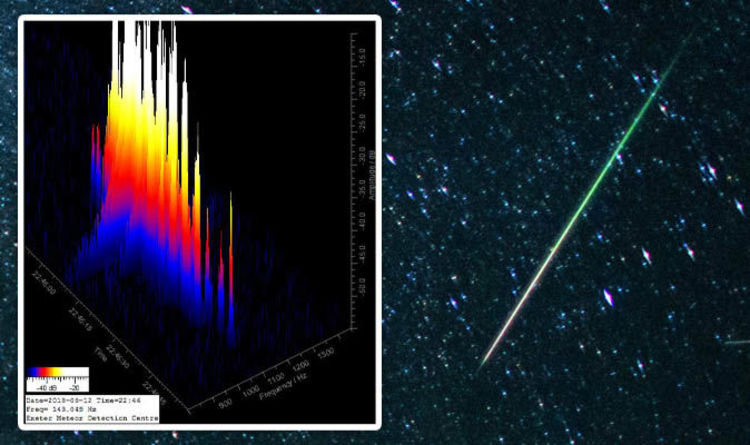 At the Exeter Observatory in Matford, Devon, tens of dozens Perseid meteors were detected during the shower’s peak.

During the peak as many as 50 to 60 meteors punched their way through the atmosphere every hour, producing bright streaks of light and erupting fireballs in the sky.

When a meteor strikes the Earth’s atmosphere at a high velocity it creates a lot of “atmospheric noise” which fine-tuned radio detectors can pick up.

A speeding meteor starts off with high frequency wavelengths and decreases to a radio carrier frequency as it decelerates above the Earth.

The meteors increase in strength as they burn up and ionise the gas around them.

The ionisation is what produces the Perseids’ characteristic trails of colourful light.

The Exeter Observatory explained: “When a meteor strikes the Earth’s atmosphere it decelerates rapidly.

“The friction created by the air causes the meteor to burn up at extremely high temperatures creating the white ‘shooting star’ that we are all familiar with.

“This process also ionises the air along the trail making it possible to reflect radio waves.”

High-powered radar signals blasted into the sky bounce back from the ionised trails and shift in frequency to varying degrees, depending on the meteor’s speed.

When observed back on Earth by the Exeter Observatory’s astronomers, the resulting radio frequency charts look like steep triangles.

The width, height and overall shape of each frequency spike can tell astronomers a lot about each individual fireball impact.

In the picture below, the blue frequencies are the baseline atmospheric noise and the bright red to orange spikes are the Perseid fireballs.

Astronomer John Maclean, Exeter Observatory, tweeted a number of the charts during the peak every time a bigger fireball was picked up by the radio detectors.

At one point the space expert tweeted: “Boom! Lovely meteor hit on our radio detectors!”

The Perseids were expected to erupt at night roughly once every minute or so, but the Observatory’s records show some fireballs appeared much more frequently than that.

One radio frequency chart shows three distinct spikes between 12.22am UT and 12.23am UT on August 12.

The Perseids were also detected by a network of webcams positioned around the country and mounted by the UK Meteor Observation Network (UKMON).

You can browse UKMON’s gallery of Perseid snapshots by clicking here.

The Perseid meteors start to appear in the night skies every year around mid-July when the Earth approaches the dusty orbit of Comet Swift-Tuttle.

Towards mi-August the planet is closest to the comet’s orbit and the shower brilliantly peaks in intensity and the number of visible meteors for about one night or two.

The Perseid meteors will remain visible at night until the last week of August albeit at greatly reduced numbers.

The next meteor shower, the Orionid shower, will peak around mid-October but will be less spectacular than the Perseids.